Lead, Follow, or Get the Hell Out of the Way 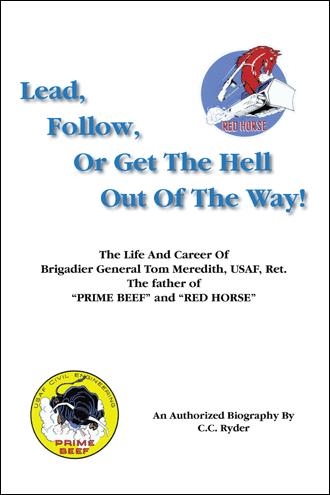 Brigadier General William Thomas Meredith, known to his friends as Tom, was born in 1919 in Halifax County, Virginia, where his father was a school principal. After much relocation throughout the state, Tom attended the College of William and Mary on a sports scholarship and seemed to be heading for a career as a professional baseball player. The Pittsburgh Pirates eventually recruited him as a catcher, offering him an annual salary of $3,000 but turned down his extravagant counter demand of $3,500 a year! It was 1941, and war was raging in Europe and festering in the Pacific, so he walked away from baseball and enlisted in the army, beginning a military career that would span more than three decades. After basic and some engineering training, he joined the Haynes Mission, spent two years in the jungles of Burma, leading a guerilla patrol, in Northern India, building air bases, and was awarded a battlefield commission to 2nd lieutenant. Then came Korea, Viet Name (where he commanded the 554th Civil Engineering Squadron) and the 1414th Air Base Group in Saudi Arabia.

In 1950, he began a long association with the Pentagon as Officer in Charge of Master Planning, Hqtrs. Military Air transport Command (MATS) at Andrews AFB. For three years, he worked on projects resulting in major expansion of Air Transport Bases all over the world.

Then came several years in Great Britain as Director of Engineering and Construction, planning and building facilities for the Army, Navy and Air Force in the United Kingdom and Scandinavia.

Moving up through the ranks from Private to Brigadier General, he ultimately was instrumental in establishing programs for the USAF that were so important and fundamentally valuable that, even though he retired from active service in 1973, they still provide combat engineering support, worldwide, for the USAF today.

Known as Prime BEEF and RED HORSE (Rapid Engineer Deployable Heavy Operational Repair Squadron, Engineering), these concepts provided comprehensive engineering and heavy construction equipment support to the USAF in combat theaters, and were a vital part of America's operations in Viet Name, during Desert Storm and again in Afghanistan.

In 1986, to honor the father of USAF combat and contingency engineering, the Air force created The Meredith Trophy, personally awarded annually be General Meredith to the winning Prime BEEF team at a competition called the Readiness Challenge, held at Tyndall AFB in Florida.

Retirement after such a lengthy, illustrious and often arduous career would put most men in a mood to kick back, maybe do a little fishing and work on their memoirs, but not so Tom Meredith. In 1973, he returned, as a civilian, to Saudi Arabia for a period of two years, with the Tumpane Construction Company. Then, joining the prestigious firm of Parsons Brinckerhoff, he managed a major project linking the Reading and Pennsylvania Railroads into a commuter rail system under the city of Philadelphia and later, as President of a new Parsons Brinckerhoff corporation branch, oversaw the building of the beautiful Sunshine Skyway Bridge in St. Petersburg, Florida.

He retired from Parsons Brinckerhoff in 1990, but during this time period he and close friend and associate Truman O'Keefe pooled 50 years of combined experience to develop the Meredith/O'Keefe Management and Construction Control System, using it successfully on all jobs they managed. Via their company, Mere'Queen Associates, they promoted and taught their system all over the country.

General Meredith also was an active participant in developing and promoting a product called Pyrocool, a unique chemical formula that extinguishes fires by "cooling" rather than smothering them. This product subsequently played a critical role in reducing the temperatures at "ground zero" after the terrible destruction of the World Trade Centers, making it possible for the rescue workers to continue their work.

At the request of Vice President George Bush, he formed a team including retired Ambassador Hank Byroade, Reverend Jerry Falwell, Montana Senator John Melcher, Congressman John Mackie, and defense advisor Richard Stilwell to explore ways to help and to stabilize the economic and political situations in the Philippines. He tells many fascinating stories of the personal relationships he forged with Ferdinand and Imelda Marcos.

In 1985, General Meredith and his wife, Patricia, also participated in a People to People Ambassador trip to China with SAME members. He remains active in both RED HORSE activities and in Republican politics and has helped run election campaigns for both Senator John Warner and Oliver North.

In addition to being in demand for speaking engagements all over the country, General Meredith has spent the last two years compiling and organizing materials and notes for this biography.

Born and raised in Canada, Mr. Ryder moved to the USA after completing five years of military service. After a career in the entertainment industry spanning some 35 years, he began writing professionally. Author of many magazine articles and a newspaper column in California, he has written a novel called The Great Cantaloupe Caper and currently authors a weekly newspaper humor column titled, In Search of Sanity.