BOTTLE TO THROTTLE
( THE DRINKING LIFE OF AN AIRLINE CAPTAIN ) 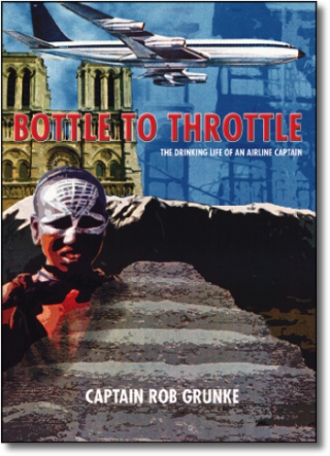 ...PILOT BUSTED! Recent TV and Newspaper headlines have brought to the public's attention yet another issue affecting the safety of our Nation's Airline Industry...the latest growing issue since Terrorism...BLOOD ALCOHOL LEVELS OF PILOTS!

BOTTLE TO THROTTLE is the "first of its kind" sizzling and true account by Captain Rob...a seasoned Commercial Airline Pilot...and also a seasoned Drinker...(his book is presently under consideration as a screenplay).

"Ladies and Gentlemen, this is your Captain speaking"..."It would be my last flight shamefully, from captain Rob to Captain Drunk."

Minutes later he was blowing into a Breathalyzer...and also blowing twenty-six years of flying! Yesterday he had been on the brink.

He takes you on an incredible journey to his past with the hope of sorting out how it had led to today's "LIVING NIGHTMARE"! Written with humor and compassion, covering sensitive issues of today that began long ago...his life begins as a kid growing up in the BRONX! The "seeds were sown" by an "Army of Drunks" on both sides of the family! Had his path to drinking begun at age seven with a sip of beer on Thanksgiving Day or perhaps with the "whiskey-dripping" cherries?

Had his Catholic school nuns and priests given him and other kids good reason to drink? "It never dawned on me that this MAN OF GOD actually enjoyed beatings, especially at swimming practice...we in our skintight Speedos." Was he later charged as a pedophile?

The Author recently went through a rehabilitation program for his alcohol addiction and shares this positive turning point in his life with readers! He's the son of a New York City Fireman, a graduate of Fordham University, a former Naval Officer, and Senior Captain and Instructor. BOTTLE TO THROTTLE serves as a reminder to his fellow Pilots of their great responsibility regarding the lives entrusted to them. It is also about Alcohol and the question...when does it become a problem?

...Statistics prove that 99% of all American households have at least one TV and that the public's demand for media truth escalated during the Clinton years and rose even higher with the events of September 11, 2001. While Rob's book may be particularly newsworthy on several subjects, his audience is not limited. His unique style of writing plus one continuous adventure after another result in a book that readers will not want to put down...regardless of profession, age, or gender

Rob is a graduate of Fordham Universtiy and the son of a New York City fireman. His experience includes that as an officer in the U.S. Navy and as a senior airline captain with a 26-year career worldwide...having advanced up the ranks from flight instructor, to flight engineer, to captain of seven different passenger aircraft.

He resides in Jupiter Florida.