Down by the Old Mill Stream 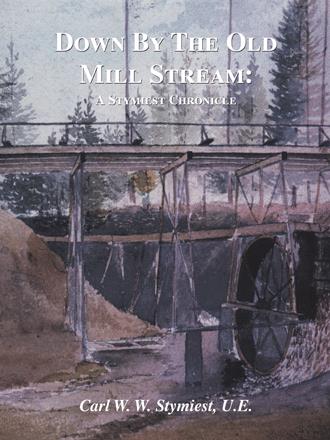 The notes from Eldon James Stymiest (Tabusintac, New Brunswick, Canada) was initial inspiration to seek-out the illusive pre-North American STYMIEST surname. After numerous hours researching the archives in Europe, Canada and the United States; 27 Stymiest generations have been ascertained; all of which tell their own story.

Did you know there are over 100 different STYMIEST surname spellings?

The above all connotations of the present-day surname spellings:

"Down by the Old Mill Stream has has dedication and passion stamped as an invisible watermark on every one of its 600 pages...Included with the book, which reminds one of a major city telephone directory by its size, is also a complete version CD ROM...Includes substantive charts, but is more than being a simple list of names and dates. The unique dynamics which define the Stymiest family take shape in many forms: copies of original signatures, family photos, letters, memoirs, time lines and remembered stories."
-Sandra Devlin, "Missing Links" columnist

If you are interested in history, you will find something for you in Carl Stymiest's Down By The Old Mill Stream: A Stymiest Chronicle. Carl has extensively researched and compiled a "must have" book for members of his very extended family, as well as those who have roots in the Miramichi-Tabusintac-Bay du Vin area of New Brunswick and genealogists looking for high-quality research material. The 600-page book with accompanying CD-Rom is truly a wonderful resource. The CD-Rom contains a gallery of pictures, biographies of many Stymiests and Stymiest connected people, and easy access to the direct line back through 27 generations to the first recorded Stymiest.

I had a fairly basic understanding of my family's history. I had visited the old graveyard near the first Stymiest home in Tabusintac. I had listened with interest to the stories told by my father and visiting relatives (and what stories they were - the family being well known for its storytellers), and I grew up in Tabusintac where many Stymiests lived or "came from". I had even spent time with Uncle Eldon while he explained to me that there had been a number of generations who lived in the United States before coming to Canada as Loyalists, and that the family was originally from Holland, but when I received my copy of Down by the Old Millstream, I had access to so much more. I had expected a genealogy but this book is far beyond that. It is a history, a collection of official documents, diaries, letters, maps, and correspondence between our ancestors and the government of the day. One particularly interesting chapter contains details about world events, including notable dates, interspersed with events in the lives of various Stymiests, from 1198 until 2001.

The book covers life in Europe from Generation 1 - Steynmests, Michaelius Johannes born 1198 continuing on to Casparius Johannes Steynmets II who left Holland for America in 1631. There then were a number of generations who lived in New York and New Jersey from this time to 1783 when Benjamin Stymiest II and his brother Jasper came to New Brunswick as United Empire Loyalists. Family life in early New Brunswick is described vividly.

Carl took the basic history and with a fantastic attention to detail has compiled a work that goes far beyond history. We can return to Down by the Old Millstream time after time, depending on our interest. We can discover the many ways our name has been spelled over the years, or way of life the family had when they were living in the Dutch colonies or learn about distant cousins, living in many parts of North America and beyond.

The genealogy section is clear, easily read, well ordered and would be of great assistance to any genealogist, Stymiest or Stymiest-connected as are many families in New Brunswick. For example, there is reference to over 120 Willistons. A number of Stymiests married Murrays and there are more than 100 Murrays listed. Other family connections include O'Brien, Wasson, Palmer, Spence, Skidd and Jardine.

I was fascinated by the brief "Family Trivia" section which includes the story of Casparus Steynmets II's wife who was fined for wearing her petticoats too short; thereby exposing her ankles. This section also details that various Stymiests families built sawmills and gristmills in the U.S. and Canada and that a Stymiest ancestor died on the Plains of Abraham.

One of the very interesting entries is the diary of Clementine who lived between present-day Neguac and Tabusintac and tells the story of family life there in the early 1800s which I would love to have every New Brunswick student read. She tells about candle making, cooking over a fireplace, spinning and weaving cloth for all of the family's clothes, and enjoying skating coasting and having an ice boat.

In his introduction, the author expresses his hope that all will enjoy Down By The Old Mill Stream. I can truly say that my family and I certainly have enjoyed the book. Thanks Carl. Well done.

Carl graduated from Teacher's College, Fredericton, NB, in 1965 and taught in Chatham for two years. He then moved to Toronto, where he taught for one year before marriage, and he settled in Vancouver. Carl received his B.Ed. (1974) and his M. EnEd. (1994) at the University of British Columbia. After 31 years of teaching and writing, Carl chose early retirement and entered into partnership of a mens wear business, The Windsor Knot Clothing Co., Inc.

During his varied teaching career, Carl managed to author no less than 14 published titles in B.C. He also has been published by the National Library of Poetry in Canada and the International Society of Poetry in the United States in two anthologies: Sands of Time (1997) and The Sounds of Silence (1998).

In 1997, 1998 and 2000, he consecutively was awarded the Editor's Choice Award for Excellence in Poetry. He was appointed a Distinguished Member in the International Society of Poets in 1997. Further publications may be found in anthologies released in 1999 and 2000, including Tides of Memory (Spring 2000); America at the Millennium: Best Poems and Poets of the 20th Century (Spring 1999); The Consuming Flame (June 2000); Colors of the Past (July 2000); Shades of Gray (July 2000); From the Mountaintop (August 2000); Time After Time (October 2000); Visions (as Karl Joseph), a contemporary audio-tape poet series, published by the International Society of Poetry in October 2000; and Awakening to Sunshine (Fall 2000).

In 1999, Carl was published in two National Canadian poetry anthologies: A Cherished Moment and Beneath the Winter Sky. He is currently completing his own anthology of poetry to be published soon; as well as this latest edition of the history of the Stymiest family. Carl attributes his 40-year interest in genealogy to his father, Carlyle (Bud) William Stymiest; his uncle, Donald Garfield Stymiest; and their cousin, Eldon James Stymiest.