Don't Call Me A Hero 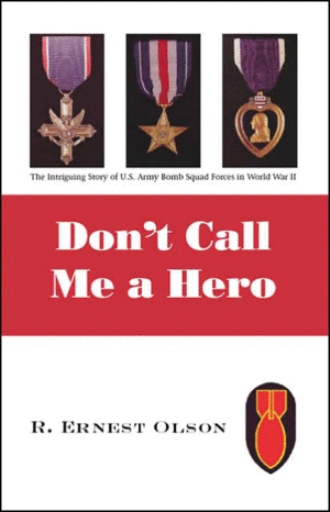 A Gripping Story of Danger and Intrigue With U.S. Army Bomb Disposal Explosions containing more than 100 tons of captured enemy ammunition echo across the North African desert...Hands of the Bomb Disposal technician working feverishly to render-safe and remove a booby trap placed by the extremely deadly German "Spreng Kommandos"... Fingers probing deep into the wound of an American soldier in an attempt to remove a live explosive projectile lodged within his body...The excitement as Bomb Disposal teams speed through Paris trying to locate and remove the demolitions set there by Hitler's henchmen to level the city...Combat operations in support of General Courtney Hodges, commander of the First Army deep within the Hurtgen Forest. These are just a few of the adversities that face a young soldier from Little Falls, Minnesota as the panorama of war sweeps across Europe.

Eric Pedersen finds himself caught up in the events of World War II. Enlisting in the Army at the outbreak of Pearl Harbor, he volunteers for the recently established Bomb disposal program organized at Aberdeen Proving Grounds, Maryland. Trained by British instructors, Eric excels in his studies and becomes a member of one of the first class to graduate in 1942. Assigned to one of the newly organized Bomb Disposal Companies, his unit is sent to North Africa, where he learns his dangerous trade under less than ideal conditions in the heat of the desert campaign. After the end of the African campaign, Eric becomes part of the invasion of Sicily and finally Italy, where he meets and forges a friendship with members of the famed Japanese-American 442nd Regimental combat Team, and a Sergeant in the 3rd Infantry Division by the name of Audie Murphy. Plans for the invasion of France by President Roosevelt's selection for Supreme Allied Commander of Europe, General Eisenhower, move Eric to England as part of the invasion force at Normandy. After being presented a battlefield commission when his commanding officer is wounded, Eric assumes command of the 26th Bomb Disposal Squad and leads it through some of the fiercest fighting of the war. Little know facts of how B.D. Squads operated under combat conditions and the extreme dangers associated with deadly explosives and booby traps are finally revealed in this true-life drama. Read the letters of encouragement sent from home by Eric's sweetheart and family. Experience the devoted friendship Eric has with his buddies, as he corresponds with Audie and Sadao Munemori. Be prepared as ghosts from World War I appear as Eric commands the 26th B.D. Squad through France into the heart of Germany.

The action is based on true accounts of Bomb Squad activities in the European Theatre of Operations. Every unit is real and as the story unfolds, extraordinary people, embodied with courage and commitment, help forge a history of bravery seldom read about of the heroes of Bomb Disposal units in World War II.

While writing the novel, and in order to commemorate the brave Explosive Disposal heroes who gave their lives while performing their duties, I took the humble liberty of using the names of actual EOD soldiers who have been killed while on active duty. They make up the men of the B.D. Squads written about in the book. They were true heroes and real people who deserve to be made note of, if only in these few pages. I knew many of them personally and know they would approve of this honor. I thank each of their families for these fantastic sons, fathers, and husbands. The other heroes, Audie Murphy, Sadoa Munemori, members of the 442nd Regimental Combat Team, and general Courtney Hodges, deserve the respect and honor bestowed upon them by a grateful nation, and I respectfully ask their families forgiveness for anything I've written that might trivialize their service to their country. I chronicled what I envisioned they might have said or written in the letters to Eric and Anna. I hope I have done justice to their personalities.

I retired after 26 years in the Army, 19 years of them a member and ultimately "First Sergeant" of Explosive Ordnance Disposal detachments stationed throughout the world. Ever fascinated with history, especially the "war years" of 1941 through 1945, I was privileged to be able to assemble a history of Bomb Disposal from 1940 through 1980 from countless documents procured while a member of Explosive Ordnance Disposal (EOD). Using these documents, I was able to compile a reasonable accurate chronological history of activities and true accounts of many incidents that have taken place since the B.D. Squads were activated in 1941.

When the project ended with the writing of the reference book "Fire in the Hole", I decided to undertake a novel of the activities of the Bomb Disposal Squads in the European Theatre of Operations, using a fictitious character, Eric Pedersen, a young Norwegian farm boy form little Falls, Minnesota, moving through actual combat situations, meeting and interacting with authentic military leaders in North Africa, Sicily, Italy, England, France and Germany, where the actions took place.

As I have noticed with so many military action novels, the language sometimes becomes so strong that children are warned of the profanity found in the book which threatens to alienate the younger generation from the heroes of past generations who fought so courageously to preserve our freedoms. I have attempted to tell the story in simple words containing no profanity or connotation that might be suggestive to favor amoral principles. I trust I have accomplished this.

I am a Commercial and Graphic Artist, gaining my credentials from countless years as an instructor and designer of training aids while in the Army. Now retired, my wife and I have raised five wonderful daughters and watch as fourteen grandchildren and two great-grandchildren make their way through this sometimes chaotic world. I served two tours in Vietnam, earning the Bronze Star with "V" device and the Purple Heart. We now live in Florence, Colorado, where life moves at a somewhat slower pace than other places and people are truly interested in what you have to say.