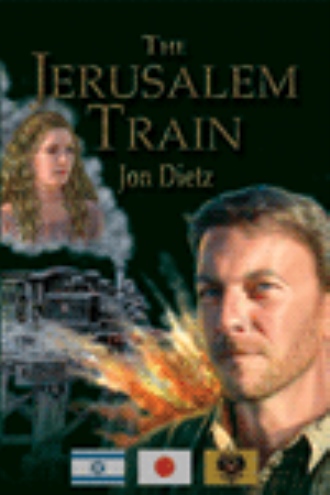 Alec Daniloff, veteran of the Spanish-American War, is on the run. He was about to be hanged by two corrupt police officers in Manila. He turned the tables, killing them both. Now he must hide on the docks of Russian-held Port Arthur, Manchuria. The handsome American's inability to back down from any challenge constantly has him in hot water and intrigue.

Uri Lieberman is a secret Zionist who is the second in command at the Russo-Chinese Bank in Port Arthur. He is using his cunning and intellect to steal the Czar's millions and help create the unborn state of Israel.

Sam Ling is Port Arthur's largest importer and exporter. He too, has his eyes on the Czar's treasure, but his motives are far less altruistic. He uses subtle blackmail to recruit Alec Daniloff into one of history's great robberies.

Viacheslav Constantine Plehve is the Czar's Interior Minister in St. Petersburg. His secret agenda is to rid Russia of its Jews. He intends to launch a huge pogrom, using the war as cover. He sends a trusted member of the Czar's secret police to Port Arthur to spy on Uri Lieberman, hoping to catch this prominent Jew in a compromising act of embezzlement.

Christina Carlson is the beautiful daughter of an American army officer. She follows her father to Manchuria, where he is supposed to report on the war. Christina is the first woman to capture Alec Daniloff's heart, and in the process place his life, and hers, in great danger.

These and dozens of other characters, many historical, populate THE JERUSALEM TRAIN. Two years in the writing, more than fifty books and reference materials went into the research.

The novel recreates long ago battles, blending fictional characters into the dramas real men and women faced during that historical period.

It's the story of two Americans in love in a Far Eastern cauldron of war and intrigue.

The novel will grab you from the first chapter through the heart pounding conclusion.

Adam Tebrugge, Attorney, Capital Crimes Division, Office of Public Defender, 12th Judicial Circuit - "When a colleague presents you with a book that they have written there may be some reluctance to enter the fray. Even when the colleague is as entertaining and erudite as Jon Dietz, I must confess that I began reading this book with a modicum of trepidation. What if I were bored or confused or angered by his writing? "The Jerusalem Train" sat on my nightstand for several weeks taunting me. Finally I could avoid it no longer and on Monday evening I picked it up with the internal command to give it at least 50 pages before putting it down permanently. Within ten pages I was hooked and ended up spending most of my Veteran's Day engrossed in the tale. In fact, though my normal bedtime is ten p.m., I could not put the book down until I reached its conclusion somewhere around midnight.

Dietz billed his book as a historical romance but I would quibble a bit with that description. In reality, this is an action-adventure novel doused with a healthy quotient of blood and sex. You need not know one whit of history or even be romantically inclined in order to enjoy this novel. The action revolves around a massive stash of gold and the attempts of the protagonists to liberate that gold from the Tsar. The finest achievement of the author is the creation of a cast of memorable characters whose paths will all intersect by the time of the explosive finale.

Quite simply, The Jerusalem Train is not a good book - it is a great one. I read three to four books a week and I have not been entertained like this in some time."

Jeff Albrecht - Sarasota, Florida - "The plot will keep you riveted to the end. Daniloff, Ling, the Russian and Japanese stories are assembled in excellent form."

Katie Fort, Berea, Ohio - "Wow! What a neat story! [Dietz] really keeps the reader involved throughout the book, especially in the last few chapters when all the characters come together for the final climax."

Linda Swisher, Florida - "What a wonderful, wonderful novel. The language simply flows! I can't wait for the movie."

Fred Wernicke, Florida - "This novel is waiting for an epic movie production. No, wait, even Oliver Stone could not make the movie as good as the book!"

Marty Kaufman, Marion, Ohio - "Because the character development early on in this novel is so well done, the little understood and difficult time period of the Russo-Japanese war is no blockade to the thrilling adventure story that is told. The interaction of several lives moves dramatically towards the explosive conclusion! I can't wait for the movie version."

Marsha Sicks - Florida - "I enjoyed the story. [The author's] use of an unknown war was great background. You could tell that he did a lot of research."

Bob Olson - Bradenton, Florida - "Jon Dietz is comparable to John Jakes. The Jerusalem Train makes history a pleasure. Who would have thought the Russo-Japanese War could be made so interesting."

Michael R. Friedman - Florida - "A fascinating way to learn about an important period of history that influenced the course of the 20th Century. A great read!"

Heidi Moore - Sarasota, Florida - "This book is riveting...you won't be able to put it down. A must read for all."

Jon Dietz graduated from Miami University in Oxford, Ohio, in 1972, with a degree in political science. His main passion was history.

He worked for fifteen years at the Sarasota Herald-Tribune as a writer and an editor. He specialized in crime and military history. He covered the Ted Bundy trial for a magazine in Cophenhagen.

In 1985 Dietz was one of only 21 Americans to receive a grant from the Delegation of the Commission of European Communities, a branch of the European parliament. He spent a month on the continent studying the European space program, its high speed rail system, and currency fluctuations.

Dietz left the newspaper in 1986 to start another daily, the Independent.

For the past fifteen years Dietz has been a felony investigator for the Office of Public Defender, 12th Judicial Circuit, Florida. He investigated scores of homicides and lesser crimes for the office. He is now in an assistant supervisory capacity in the investigative division.

The contributing editor to The Jerusalem Train was Patricia Startzman.

Anyone wishing to communicate with the author can e-mail him at dietz111@comcast.net.