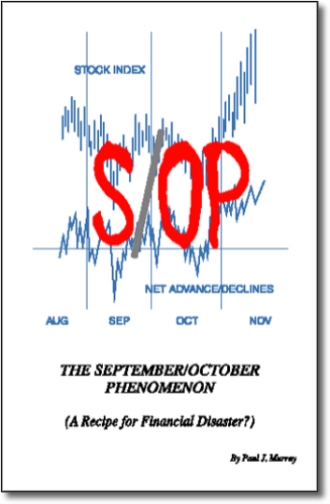 The various chapters of this work are discussions of those subjects and topics that I believe, when taken collectively, have had a major impact on our Economy because of the events of 9/11. That impact continues today. - Paul J. Murray

Anyone who wants a better insight into any of the following topics:

Anyone who has:
Ever invested in stock market
Ever paid a capital gains tax on a mutual fund distribution
Concern about our vulnerability to terrorism
Wondered why our economy and financial markets turned negative in 2001

An attempt to identify and examine those financial institutions, economic events, and tax policies, that were in place prior to 9/11 to see if there were any interrelationships between these institutions, events and policies that could have led to the timing of the attacks to have occurred when they did. If there were, in fact, recurring events, then could these recurring risks be diminished or eliminated. The various chapters of this work are discussions of those subjects and topics that I believe, when taken collectively, have had a major impact on our Economy prior to and because of the events of 9/11. That impact continues today.


What is the Book's Main Message and Its Importance?

There are some problems inherent in our tax system that causes artificial non-economic trading in the stock markets to occur annually during the September/October time frame. This trading is not in synch with economic conditions. It poses a problem because it creates artificial weaknesses in the financial markets.

If anyone wanted to inflict economic damage to the financial structure of this country they are most likely to achieve their goals during the months of September/October during this phenomenon when mutual funds and financial institutions, in general, are taking advantage of the selling by mutual funds who must, for taxation purposes, distribute their capital gains by year end. Mutual Funds generally close their books by October 31st in order to provide enough time to determine and distribute their gains in compliance with tax laws.


Why Was This Book Written and What Was Learned as a Result?

This book was inspired by the events of 9/11 and my realization that there was probably a sinister reason why it occurred during the September/October Phenomenon. I was already interested in the influences of the Federal Reserve and its actions (and inactions) relative to the interest rate yield curve. This relationship, I suspected, pointed toward further weaknesses in the economy and the financial markets. I suspected that there were some other events and policies that also pointed toward this particular time. I needed to satisfy my own curiosity.

Hindsight being 20/20, I wanted to identify what could have pointed to this particular time. I tried putting myself into the mind of someone who would want to inflict as much financial damage on the economic stability of this great nation.

Was there a time when the maximum amount of financial and economic damage could be inflicted? Could such a time be predicted? When would be the best time to inflict a follow-up that could, or would be the coup-de-grace?

I wanted to use my unique training and experiences in this analysis. I felt that what I was reading and hearing in the media was not going to the heart of the matter. The potential financial impact and economic severity of the 9/11 attacks was not adequately being presented nor understood.


What Will the Reader Gain By Reading This Book?

The reader will definitely gain knowledge of some of the problems inherent in our tax system that cause non-economic and artificial trading in the stock markets that occur annually during the September/October time frame. This trading has no relevance to economic conditions. The reader will gain knowledge of this artificial weakness in the financial markets and our vulnerability because of this.

Primarily, the reader will see the events of 9/11 from a different perspective. Also, the reader will gain knowledge of some technical aspects of interest rates and the financial system, timing of the stock markets as well as the interrelationships between tax policy, financial markets and economic activity. Some of the predictive qualities of watching various technical aspects associated with interest rates, yield curves, advance/decline ratios and market activity will be gained.

Reader could reduce their investment risk by timing some of his investment activities to coincide with the September/October Phenomenon (S/OP) if our law makers do not eliminate this artificial restraint on normal market activity.

A reader will become more cognizant of some of the influences on the financial markets - interest rate changes by the Federal Reserve, tax policies, seasonal influences, etc.

The reader of the book can take topics of this book and apply them to their own investment philosophy, situation and strategies. Armed with this information, the reader might want to get active in petitioning lawmakers to change existing laws to eliminate these artificial influences so that the long term market appreciation potential is not artificially negatively influenced.

More importantly, changing the tax law (taxing the recipient of mutual fund capital gain distributions) that imposes artificial influences would go a long way toward elimination of the potential vulnerabilities in our financial markets.


How is This Book Different?

The uniqueness of this book is a result of the unique background and training I bring to this analysis.

My formal education: BS in Economics. My early career was in Computer Systems Analysis and Programming. That training I have used to this day. I have over twenty-eight years as a professional in the financial services industry.

I have always been a student of technical analysis. I have market charts and data that go back to the early 1970s. Early in my current career I was interested in interrelationships between certain facts. Those early and ongoing observations triggered thought processes and questions about 9/11 that I had to pursue. I did. The book is the result of my inquisitiveness.

What Should the Reader Know About the Author?

My background and training is unique. My formal education is in Economics Ð I have a B.S. in Economics from Albright College, Reading, PA Class of '64.

My Early career was in Computer Programming and Systems Analysis. I have used that training to this day. It is extremely helpful when doing systems analysis to work backwards Ð what is wanted as a final product (?), what is needed to produce the final product (?), and where do you get the necessary data to achieve the end product (?). Computer programming is exacting and requires concentration.

I have over twenty-eight years active experience in the financial services industry.

Over the years I have learned to identify those individuals who are experts in their particular fields - my gurus. I learned to depend on the data, not someone's interpretation of that data, unless they have proven themselves to me.

I have always been a student of technical analysis. I have market charts and data that go back to the early 1970s. That data was extremely helpful in researching the September/October Phenomenon. If additional data were needed, I knew where to get it. Early in my current career I was interested in interrelationships between certain facts.

The author can be contacted at sophenom@aol.com.