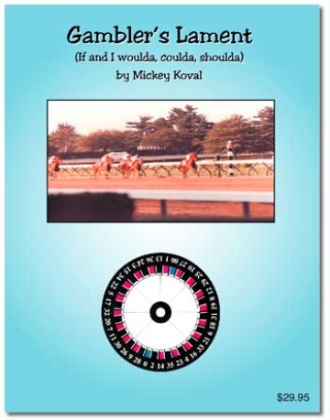 Expressly written for gambling entertainment on either horseracing or roulette playing at a casino. "Method play."

Mickey Koval (real name Michael Kovalovsky) grew up in the heart of New York City, born in a walk up tenement on Third Avenue (the elevated train line was still there in 1931) between 103rd and 104th streets. This area was later to become Spanish Harlem, his parents moved around Manhattan, doing janitorial work, thereby gettting a free apartment in exchange of their daily duties, from 96th street and Park Avenue to finally settling in what was then referred to as the "Silk Stocking District" bounded by 59th street to 86th street, and between York and Fifth Avenues.

73rd street between York and 2nd avenues was a mismarsh of mixed ethnic groups as were other streets in the "Yorkville section of New York City", primarily this particular block and several others housed Czechoslavakian, Polish, Italian, Spanish and several tenements of the then referred to, Negro people. However, predominance seemed to swing to the Czechs, Slovaks, and Poles as was evidenced by the "Sokols", social clubs, that housed gyms, restaurants, bars. Big parades of the ethnic groups were held, and folks would march in the native regalia of dress.

Mickey, as he grew up, would often run errands for the local "Bookmakers" such as getting sandwiches, coffee, papers, and even sometimes containers of beer, in return for a few pennies to spend. These pennies were often used to "gamble" with by pitching them up against the wall, and the one who's penny hugged the wall closest, would be the winner take all!

As kids growing up in that type of environment, we also would gamble with marbles, and fill soda caps with melted wax, chalk a ring on the street and use the middle fingers and thumb to flick the cap into the ring or rings as the game progressed.

Of course, there was always a deck of cards available if one wanted to play games, and I don't mean "steal the old mans bundle" or "war" it was either rummy, poker or pinochle!

Throughout his growing years, Mickey would gamble, primarily on the Horses, but later on, the casinos drew his attention more and more, and therefore this book.

Mickey Koval "is not", I repeat, is not, a professional gambler, and this book being written for those like he, who can actually "enjoy gambling" by limiting themselves to what he refers to, as a "given" and that is to accept the fact, if one gambles too long a period of time, they will eventually become a "loser!"

So, hopefully, you will read on, and glean a few ideas of your own on the "spirit of gambling."