God and Fallacy in the Theory of Evolution 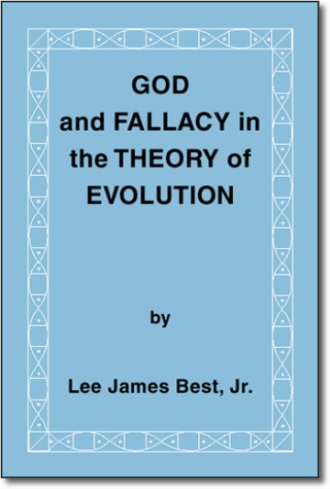 The author describes God and Fallacy in the Theory of Evolution as a well researched examination of Charles Darwin's Theory of Evolution. There are numerous examples of living species that the authors uses in support of his assertion to that there is a living Supreme Being, infinite Reasoning Mind, or God, who is the Creator of life and the guiding Director of its evolution.

Whereas many believers in a Creator of Life contend that evolving change in living species have never happened, the author holds that changes called evolution in species are scientifically verifiable, but that the cause of evolution is a reasoning living Supreme Being called God. The origin and evolutionary changes of life forms are not due to blind chance or accidental causes that are without life and mental ability. Extraordinary examples from nature, historical facts, and ordinary human reasoning have led the author to this conclusion.

This reasoning prevails in leading one to conclude that there is a Supreme Mind who is active throughout history in the shaping of life forms in an evolutionary process - despite the destructive and imperfect qualities found in some living beings. These destructive and imperfect qualities, however, are definitely a weaker minority; otherwise all living species would have been eradicated and made extinct a long time ago.

An examination of the biological changes in various life forms such as birds, octopuses, horses, etc. and inquiry into the nature of a wide range of phenomena such as DNA molecules, the 2nd Law of Thermodynamics, homing and self-protective instincts, and electromagnetism helps to cogently convey the author's interpretation of what biological evolution is and why it has occurred.

"James Best has written an intriguing and insightful analysis of Charles Darwin's theory of evolution. While agreeing with much of Darwin's theory, he sets forth his views and reasoning and arrives at some different conclusions about the origin of living organisms. His research on the subject is thorough, and his conclusions are thought provoking and well reasoned. His logic is clear and convincing."
- Robert B. Morgan, Attorney at Law, former Director of the North Carolina S.B.I., North Carolina Attorney General, and United States Senator

"Overall, the book presents many fascinating phenomena, many of which cause one with belief in a Creator to marvel in awe at the design."
- Dr. Timothy D. Metz, Chairman of the Department of Biological Sciences, Campbell University

"In reviewing your book, I found no scientific errors. You have made an excellent case for the existence of God!"
- Dr. Ronald W. Maddox, Dean and Professor, School of Pharmacy, Campbell University

Mr. Best has had a broad range of experience in the fields of education and religion, having worked in various educational and religious institutions over a period of years. His experience includes work in churches, public schools, a sheltered workshop, a cannery, printing companies, travelling and selling, and working in the real estates field as a manager. He was an appraiser broker for over thirty years, has done freelance writing, and other occupations.

Since his college days, Mr. Best has had an ongoing interest in the puzzles surrounding religion, philosophy, and science in their relation to the theory of biological evolution and he tackled this subject in this unique critique after many hours of reading, researching, and intensive thinking.