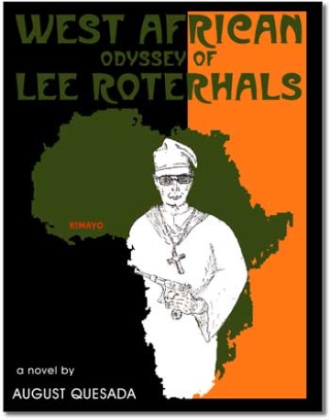 Transferred to Kimayo in West Africa to promote his company's Queen of Sheba cosmetic products, Robert E. Lee Roterhals, a closet redneck from Atlanta, parlayed a marketing director's job to become ultimately a de facto white dictator of forty million blacks who feared and worshipped him as "Baba Oweebo."

During his youth, Lee aspired to emulate Jacques DelaCour, his maternal forebear and a Natchez plantation gentleman whose absolute power over his four hundred slaves obsessed him. A chance reading of Sir James Brooke's biography made him fantasize himself working for the white rajah of Sarawak on a railway system whenever his situation in Kimayo became unbearable for him. Forced to witness a public execution of robbers rudely awakened Lee's own dormant lust for absolute power of life and death as exercised by the Kimayo security chief on the robbers.

His improbable sojourn in Kimayo as a marketing director took a deadly turn as a he schemed to grab that absolute power as a self-styled "Khalifah of Kimayo" while mired in intrigues, assassinations, betrayals, civil war, and carrying on a mercurial romance with Liza, a lonely English woman married to the security chief, against a volatile West African backdrop.

In the German dictionary, there is a word for skinhead: kurzgeschorener but none for its "kissin' cuzzin": redneck. So a literal translation was concocted: roter (red) and hals (neck) and voila! Robert E. Lee Roterhals, the anti-hero, came into being to star in this novel, West African Odyssey of Lee Roterhals.

August Quesada, after acquiring two engineering degrees and doing roustabout work in the wild and wooly West Texas booming oilfields of the 1950s, took off for the South American oil fields with his young bride living in a Parkersburg house on skids. Working with the latinos, he learned that Spanish was spoken in many variations through out South America infused with local Indian words and revolucion was not a dirty word.

Returning to the States, he helped plan and design pipelines and compressor stations in Houston transporting natural gas from the Louisiana swamps and bayous to the Atlantic seaboard. Commuting between Houston for weekends and the New York headquarters, he worked with a team on liquid methane processing tests and patent applications. Exploring the Gotham City's labyrinths, he ate hero sandwiches standing up at those hole-in-the-wall eateries while staying at Park Sheraton. Transferred to Columbus, Ohio, he became a group leader of nineteen engineers and technicians doing bench and wind tunnel tests, and prototype developments earning patents. Having written a manual for technical reports, he found it difficult to start writing his first novel (later abandoned) during this time and to divorce himself from the technical writing mindset he had gotten accustomed to. Moving to Chicago, he helped with evaluation studies for worldwide wildcat prospects including Somalia offshore and provided technical / engineering support for the North Sea construction projects for Great Britain, Netherlands and Norway. During this time, he experienced elitist suburbia / downtown high-rise living and high-stakes "corporate poker games" in Middle America with its foibles and Byzantine intrigues that someday he would like to write in another fiction fermenting in his head.

Restless, he contacted his former boss in South America, then in London, and got an assignment in West Africa. August realized how different Africans were and the continent itself was from what he had imagined and read voraciously before arriving. Working closely with the nationals around-the-clock in the bush and towns, he earned their loyalty and they protected him and his family in spite of the physical and health hazards enabling him to explore the animistic Africa bereft of the Tarzan and Phantom ballyhoos. He came across the imported rednecks who "inspired" him to write about his first to-be-published novel about Robert E. Lee Roterhals, a redneck from Atlanta. There is no redneck in the German dictionary, so it was translated literally as roter (red) and hals (neck). After his first tour of duty in the Middle East, he returned again to West Africa.

After his second stint in the Middle East, he retired to Florida, became involved with a local writers' club becoming its president for three years and worked to make it tax-exempt, helped organize the first authors/book fair in the community college and the first Good Earth Day fair in Panama City, joined the Citizens Advisory Committee of the Metropolitan Planning Organization for Bay County and its chairman for a year (for the first time in the county, he helped appoint women and African Americans to the CAC) and, also became member of two environmental groups. He hopes to start fine-tuning his finished novel of an unlikely romance between an American engineer and a latina, both abused and psychologically damaged in their youth, in the Columbian jungle and after that, work on the roughed-out-but-more-than-an-outlined fiction of a homosexual affair between a Moslem engineer/student and his American professor played out in Texas and a mythical Middle Eastern emirdom with "ghettos" of resident expatriates.