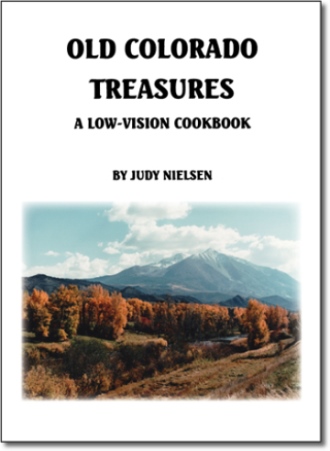 This is a complete, general cookbook to entertain your family and friends with some old and many modern scratch recipes that will save money and produce excellent baked or cooked foods.

This specially designed cookbook is a 'one of a kind' and will be especially useful for those with dry macular eye disease or very low vision. The recipes are heirlooms that are meant to be passed down through the generations.

Judy Nielsen was born in Denver to James R. "Moe or Bus" and Genevieve Wessel-Maclear in 1945. He owned Denver's oldest machine shop & foundry up until he retired in 1981. You can still see some of the grates & frames in the area of Denver, Co. The author also has a brother named Jerry who is married to Frieda S. Maclear. After graduating from Golden High in 1963, Judy attended the Colorado School of Fine Arts and CSU. She then ski-bummed in Winter Park, Aspen, and Arapahoe Basin before going to work at her father's foundry.

In 1967, Judy married Charles R. Nielsen and moved to Carbondale, Co. where Chuck ran his own plumbing company. They also became outfitters and ran the Aspen Valley B&B before moving to Paonia, Co. and semi-retiring in Darby, Montana.

The author's favourite times were packing up to high mountain lakes, fishing and taking photographs. She does oil and watercolor paintings and raises paint horses.

After spending a few summers boating in Montana and Odaho, Chuck and Judy plan to return to their native Colorado.

With her vision fading, Judy's days of painting are nearly over and her career as a guide ended early. She is now working on two new books and a video "Boating the Rockies" and "Back Trails & Old Campfires."

While finishing this cookbook was a major accomplishment and the hardest challenge of her life, she was able to keep the promise she made.

Many photos and Bible verses since have been added and it gives you a little insight into Judy's life.