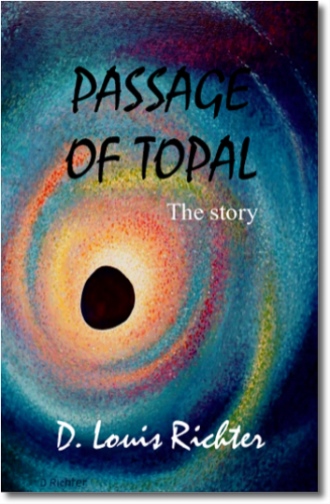 Passage of Topal is the story of David's, whose spirit travels between worlds of similarities, carried by his attendant clown beyond time to places where life's experiences have different expressions.

The following excerpts are taken from various chapters of Passage of Topal.

D. Louis Richter's professional educaton started at the Chicago Art Institute. He received his B.A. from the Institute of Design in Chicago, with postgraduate work at Black Mountain College, North Carolina. Inspired by his mentor, R. Buckminster Fuller, he then studied manufacturing design and structural engineering.

In 1952, the author met Irene, the love of his life, and after a nine-week courtship they were married.

His professional work started as an Aircraft Structures Engineer with Convair, followed by Product Design Engineer, Manager of Building Products Research and Development, and finally, co-founder of Temcor to design, manufacture and erect aluminum Geodesic Domes and related Space Structures. He now has seventeen United States and International patents to his credit including some for very large aluminum structures. Many of his papers have been published throughout the United States, Europe and Asia with several of his articles being reprinted in books about R. Buckminster Fuller.

D. Louis Richter was interationally recognized for his creativity and his contributions to the art of Space Sturcutures, when he received the University of Surrey's Special Pioneer Award.

He has retired from Temcor as Executive V.P. and lives with his wife of fity years in southern California, close to his two daughters and grandchildren.

And now, he has picked up pen and palette and returned to his first passion, expressing thoughts and ideas about the wonders of life with stories, poetry and acrylic paints on canvas. The publication of his book, Passage of Topal, will be followed by others including a collection of paintings expressing the poetry of life, love and time.