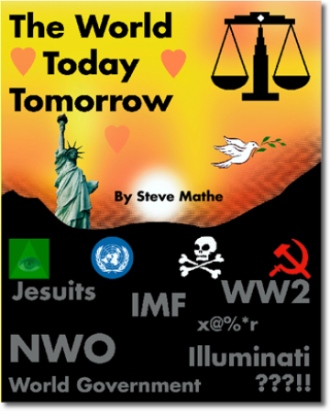 THE WORLD TODAY - TOMORROW begins with drawing our attention to the dastardly, violent, global corruption rampant in the world today. Then it attempts to find the causes, by pointing at governmental systems; the super rich elites; and at conspiration organizations - with a big question mark! The third section concludes with a proposition to convert the global government systems into a 'participatory direct democracy' in which government members are transformed into public servants - serving, and administering the will of the people, who in turn are strictly guided by the dictates of 'moral Law' at the core of the national Constitutions. All legislation local, national, and foreign policy; and or any proposition affecting the lives of the people - must conform to the dictates of moral precepts at the heart of the Constitution.

The author Steve Mathe, is an Australian age pensioner, now living in Germany with his German wife of three years. He has been a searcher of Truth for many decades, mostly on spiritual lines. After much study of all comparative religions; modern and ancient; with all the horrors on Earth in the past as today - he came to the conclusion that a): - the preached personified God is false, b): - does not exist, or c): - He does not operate according to human concepts and or, to human expectations.

Steve was never interested in politics, being of the common mind that politics is dirty, corrupted up to the neck - and not worthy of wasting time on it. Till the 1970s! He followed the installation of U.N. with great promises to Mankind regarding Justice and Peace - which has turned into a great lie! Then he looked at local politics, and found them full of hypocrisy and corruption.

Steve saw that 'Political Party Government' could not and would never work for the 'Greater Good' of the people. A brilliant idea manifested itself into his mind. "Why not have the people propose legislation and policy, and reduce the politicians' power to that of 'Public Servants' administering the Will of the majority of the People?" That's how the Citizens' Rights League came into existence.

Later on, he discovered that the CRL idea was not a unique idea of his own. The Internet is full of Direct Democracy debates and D. Democracy promotions. The problems, from Steve's point of view with these Democracy promotions is that: they are proposed to be implemented on current global systems - and on current global moral values. It would fail, as all elimination of past cruel governments, often - were replaced with worse ones. Take Russia for example. Replacing the Tzar with bloody Bolshevik Communism. Or in Germany: replacing the Kaiser with Hitler. Or the African nations: replacing the British lion with their own cruel masters. The people going from one form of slavery into another form of slavery - often under a greater despotic ruler.

Steve's Citizens' Rights differ from the other proposed Direct Democracies in the fact that under CRL, all legislation and all policies have to conform and be in harmony with the ' Moral Dictates in the Constitution.' The often heard objection is that: " you can not legislate morality on the people." True! But you can legislate morality in the Law. After all, we do have some moral rules in our laws now - but they are concocted and formulated to favor the gains of the lawmakers and the big Corporations!

Steve could not make much headway on the Internet as most of the people for D. Democracy on the Internet are activists already embracing a system, mostly of their own - with little inclination to consider others', So, this book was written with the purpose in mind to reach the general public seeking an answer to our current global and national dilemma. People mostly too busy earning a living, or running a household to surf the Internet. They can study the contents of this book at their own leisure - and draw their own conclusions. Hopefully...with a positive decision.