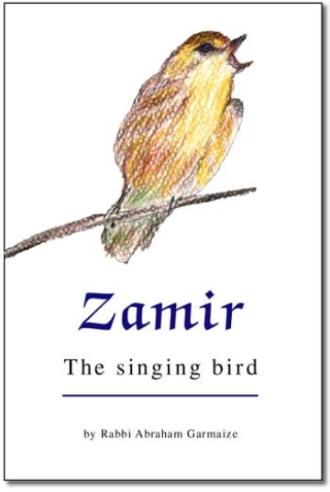 This book contains two parts. Part one is "The War of the Jews: How the Jews are Fighting Each Other and the Remedy." Part two is ecumenical memorial services for 9-11.

"Like a lazy river in summer that gives water to a thirsty land," is how Rabbi Garmaize describes God's love as it is meant for the people of Israel.

Garmaize uses ancient lessons from the Torah and the Bible to implore today's Jewish Community to shower one another with friendship, brotherhood and love.

His purpose in this book is to show a divided Israel it is necessary to accept one another in Peace, so the same olive branch may be extended to those who would relish its destruction.

It describes the tragedy, hope and prayers.

Rabbi Abraham Garmaize was born in Israel in 1931. He served in the Israelis Army. He graduated Givat Washington in Israel, where he went on to become the Principal of Public Schools in Israel. He was ordained as a Rabbi at Tifereth Israel Academy in New York State.

Rabbi Abraham Garmaize has been the religious leader of several large congregations in the United States. He obtained a Masters in Religion and a Ph.D. in Socio-Psychology from the Pacific University of California. His focus on education has taken him on a pilgrimage throughout the USA and Israel, where he has served as educator and principal in schools both in Israel and the United States.

Rabbi Abraham Garmaize has served as Teacher, Principal and Rabbi of Hebrew Schools for over forty years. Prayers for a Rabbi were answered when at seventy years of age he came out of retirement to lead the Mat-Su Jewish Center in Religious Services, Education and Social functions in Matsu Valley, Alaska. He represents Temple Knesset Israel in the community at large, performing duties at various ceremonies in the area. He has served as Chaplain in the United States Air Force during the Vietnam Era. He continues to serve as a Chaplain for the American Legion as well as American Veterans in the Mat-Su Valley.

Rabbi Abraham Garmaize is a Master Mason and Chaplain for the local Masonic Lodge in Alaska.

Rabbi Abraham Garmaize continues to serve the community and share his wisdom and knowledges with lightheartedness and love. He has published many articles over the past forty years, and continues to write.