the Mincer of Words To: the One Whose Essence Minces Those Words Even Further 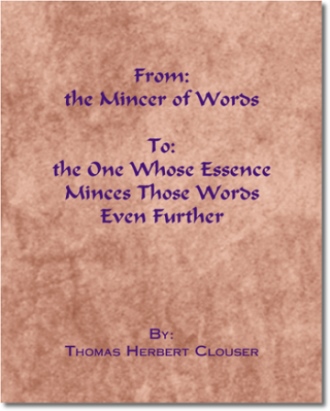 From: the Mincer of Words To: the One Whose Essence Minces Those Words Even Further is an emotional collection of poems from an average joe. Falling in and out of love, watching others do the same, dreaming big dreams only to watch them fly away in the wind. Celebrating triumphs, mourning losses, and just having fun. The Poet writes about his observations in life, sharing his heartaches and joys. From the opening line: "a poem is a cloud in the sky", to the gripping words: "she threw the rose away", to the patriotic promise of September 11: "no more shall terror reign", The Poet captures your heart with brilliant wordplay and blunt honesty. He creates for the reader a Treasure Hunt through Four Seasons.

When serving my country in the US Navy in 1998, I came to the mutual agreement with dear old Uncle Sam that the sailor's life wasn't for me. A nervous breakdown at Knoll's Atomic Power Laboratory in upstate New York shattered the possibility of my working underwater in a nuclear submarine's engine room. So life goes.

My parents welcomed me home with open arms, without any sense of resentment. A year later, they ran away from Michigan to the warmer climate of the mid-south. In the following months, I wrote my first poem: "Courage".

My brother immediately tried entering those lyrics into a poetry contest, but as luck would have it, "Courage" was too long. So I wrote "Seen and not Heard". Twas a semifinalist in the International Society of Poets' (ISP) monthly contest, and was also published in one of their poetry anthologies.

So all my friends and family posed the big question: "When are you going to get published?" My answer was always "it's not ready yet."

Which poems would I include? I liked some poems, and wasn't quite sure on others. I thought to keep this one in, and leave that one out. But every time I told someone I was going to leave one out, they replied "that's the story of my life, you have to put it in your book."

I have come to the conclusion that every poem written has its own special meaning, whether to the author, or to an anonymous reader. Some words brought me comfort, while others encouraged my friends. A few were just for fun, while others seemed to prove that there is always someone else out there that knows "how you feel".

So when am I going to get published? The answer is "now". I hope that this collection of lyrics helps inspire you to live a better life, or to feel better about yourself, or at least, that you enjoy the poetry.