Freedom - Keep On Fighting For It 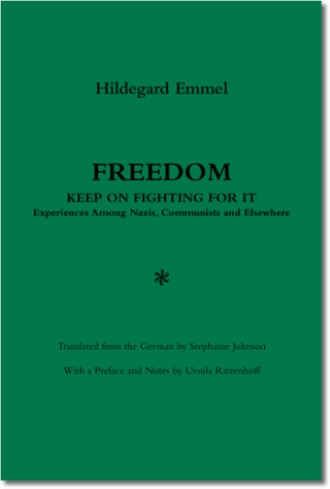 In this memoir a courageous individual fights for her personal freedom. We get an insight into the different oppressive and rigid systems she encounters, most of which are of a political nature.

In the first chapter the author is a student and later a teacher in Hitler's Germany.

During the post-war years she tries, unsuccessfully, to get a position at a university in West Germany. She decides to go east and, finally, becomes a lecturer of German literature at Rostock University and a few years later a professor at Greifswald University. Both universities are located in the part of Germany that until 1990 was run by a Communist Government supported by the Soviet Union. In 1958, when that government's attitude toward the so-called bourgeois scholars changed, the author loses her teaching position when she refuses to retract her book on Goethe. Two years later, after having declined various non-teaching offers, she has to flee to West Germany (Chapter II).

Even though Professor Emmel is by now a fully established scholar, she still is not offered a professorship in her native land. The reason: women are not wanted at the lectern. After temporary appointments in Norway and Finland, she accepts a regular position at Ankara University where she stays for nearly four years. In an Islamic country life for a single woman is not easy, though officially, Turkey has had an equal rights for both genders since Attaturk's government in the thirties. Her colleagues advise Miss Emmel against traveling alone. However, she uses the opportunity to get to know this intriguing country and most of its neighbours all the way to Jerusalem. On this last occasion she gets caught up in the 6-day war of 1967 (Chapter III).

In the fall of the same year, Professor Emmel is offered and accepts a position similar to a chair at a state university in the United States. During the next fourteen years she finds much to her surprise, that in the land of the free there is less freedom in the academic environment than she has experienced elsewhere. We learn about her trials and tribulations in a rigid over-administered system in Chapter IV.

In 1981, after reaching emerita status, Hildegard Emmel retires to Bern, Switzerland where she writes this book. It appeared in Germany in 1991.

Hildegard Emmel was born in Frankfurt, Germany in 1911. She is the author of numerous articles and books in her academic specialty, German literary history.

She studied during the Hitler-years receiving her PhD degree in 1935. After the war she taught at different universities in the former GDR, as well as in Norway, Finland, Turkey, and, finally, in the United States.

In 1981, upon her retirement professor Emmel moved to Bern, Switzerland remaining professionally active, In the fall of 1991, shortly after the reunification of the two German states this book appeared in Rostock, Germany, the place of her first university employment. At the same time, nearby Greifswald University conferred an honorable doctoral degree on her, thus righting a wrong committed in 1958 by dismissing her for political reasons.

Hildgard Emmel died in 1996 after a short illness. It was her wish that this book would be translated into English.