Bestest Editorial Cartoons of the Year- 2002 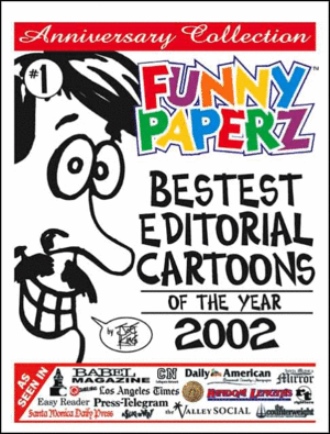 An entire year's worth of controversy for your coffee table! Funny Paperz #1 is an anniversary collection of illustrated political savvy and satire covering 2002 from the local, national and international datelines by author and artist Joe King.

Joe King puts a hammer lock on history with over 300 illustrations taken from his daily op/ed for the Santa Monica Daily Press.

Sometimes brutal, sometimes elegant, always on target — Joe is a pen and ink pit bull who tends to chew through his leash on a daily basis.

"Restraint" is not his forte. Better to say he always "Draws the right thing".

Funny Paperz #1: Bestest Editorial Cartoons of the Year — 2002 is 120 pages of pugilism distinguished by eleven rounds on the following topics:

That Joe Guy, "The Artist formerly known as" Joe King is a "prince" of a Designer, Art Director, Cartoonist & Licensing Professional in product development & packaging. As a consultant, Joe designs both the product & the packaging for a wide variety of children's specialty items. He is currently in production of several self-syndicated comics distributed worldwide under the banner of his publishing forge: FUNNY PAPERZ.

Inducted into the National Cartoonist Society in 1991, his first comic strip series, Anomalies was published in 1985 by The Easy Reader, winning their annual contest. Pen and ego spurred on, Joe followed up with a string of other comics in various formats. The romantic saga Back Roads, the proud parental sentiment of If Your Parents Really Loved You…, a full-page Sunday feature on car culture; Route 66, and several more devoted to charitable pursuits.

Poor Judgement and St. Nick were created as a gift to the children at St. Jude's Ranch, while Aquamarines was penned on behalf of the anti-whaling efforts of Sea Shepherds. His graphic novel, Men From Earth earned worldwide distribution on its first day of publication July 4, 1991 at the San Diego ComiCon and eventually went into pre-production at Paramount Pictures as a live-action feature in the fall of 1996.

Rust & Wrinkles ran internationally before being collected and published as his first anthology in 1992. The launch of this online gallery was christened with a daily political cartoon in 1996. The Easy Reader again played host to Joe's next daily feature, Webster, running from 1997-1998.

Joe signed his first literary agent on Thanksgiving, 1998 for 101 Uses for a Dead Lawyer. During 1998-1999 the Seal Beach Chamber of Commerce published Here & There. That April saw his first Limited Edition Fine Art Print released at the 12th Annual Charity Car Show in Seal Beach!

With more than 1,000,000 visitors to his website to date, Joe is being laughed at in more than 14 different countries. An honorary graduate of Platt College, he has been a guest speaker there, at the Pasadena Art Center School Of Design, and the Palos Verdes Art Institute. He is the founder of IMAGINE NATIONS a global online community of amateur and professional cartoonists dedicated to freedom of thought. You can follow Joe's daily scribbles as the Political Cartoonist for the Santa Monica Daily Press. He can be found any evening with Angela, the love of his life as they walk along the South Bay shore.