Stories of a Canadian Childhood 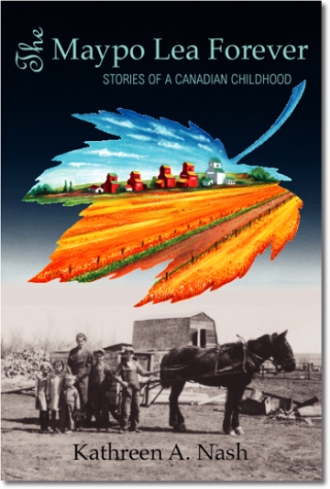 This collection of short stories, written from the author's own early experiences, gives a rare insight into a child's perceptions of adults, situations, and the world around her as she was growing up on a Canadian prairie farm through the years of the great Depression (1929-1939) and World War II.

Throughout these entertaining stories the author remains conscious of her readers - who could easily range in age from adolescence to senior, providing them with intriguing descriptions of early farm equipment, and methods, where needed, as in Raised on Meat and Potatoes (page 32), "When I was about thirteen my father taught me how to operate a hayrake and I loved it! I had no problem at all driving a team of horses... and round the field we would fly on this lightweight contraption... gathering the sweet-smelling hay into the long row of semi-circular tines on the backs of our rakes, tripping our levers at the right moment to dump it, leaving field-width windrows of hay, ready to be picked up by pitchfork or by haybuck and made into large haystacks...."

There is a deliberate and pleasing balance to this selection of stories, both in content and in style. Underlying Ms. Nash's frequently humourous presentation of her experiences, is an obvious awareness of the seriousness of the difficulties of the times of which she writes, and the particular impact those difficulties may have had on children, as, for example, in How I Helped Win The War(pages 222-223). "Just as war songs helped some people to deal with the war, so they helped me, and possibly others of my generation, to better understand some aspects of the war. ... Romanticized though the songs may have been, through them I began to visualize what might be really happening to the young men and women... who had left our community to go to war. ...There were no songs that told about the deaths and possible deaths."

Kathreen Nash's insights into the early perceptions and the depths of children's imaginative play, so sensitively described in Yellowleg Hall, are reminiscent of Laurie Lee's Cider With Rosie (Century Publishing 1991), or Kenneth Graham's Dream Days, and, The Golden Age, first published in the late 1800's.

Dr. J. B. London, of Classic Memoirs, and a professor at the University of Victoria, says of this book: "Kathie Nash has a way with words. A published poet, she looks for both sound and meaning in those words she carefully chooses to tell her stories. ... Ms. Nash is a consummate story-teller, and what is most effective about this book is the way she pulls her readers into the world of the little farm girl, and holds them there from cover to cover. Often poignant, frequently laced with gentle humour, the childhood vignettes she has collected here are delightful throughout. The author's ability to recall even the smallest details of setting, and recollect emotions arising from relationships at home and school are truly commendable."

"The Maypo Lea Forever by Kathreen A. Nash is a most absorbing series of stories of rural child life in Western Canada during the 1930s and 1940s -- and it could be one of the few books which might simultaneously warrant placement in our school libraries while being of interest to a high percentage of adult readers."

The fourth child of six, Kathreen Nash was born on an Alberta farm and grew up there through the Depression years of the 1930's, moving with her family during World War II to the Fraser Valley of British Columbia. After High School she completed training and worked as an Infant's nurse before marriage. When her own children were grown she continued her education and subsequently taught future childcare workers for fourteen years in a Fraser Valley community college, in the Early Childhood Education department.

When illness forced an early retirement, Ms. Nash moved to Tofino, on the west coast of Vancouver Island, where she operated a Bed and Breakfast for eight years. She has been actively involved in amateur theatre and writing from the age of six, and has had a few of her stories and a number of poems (some award-winning) published over the years in such periodicals as Whetstone, A Writer's World, Event, Diversions, The Vancouver Sun, The Sound, and others. Kathreen Nash now lives in Victoria, British Columbia. This is her first full-length book.