Allergy Alert Cookbook - The World's Best from East to West 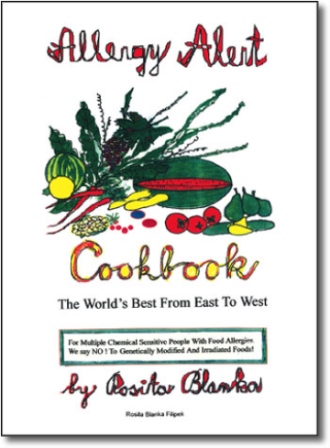 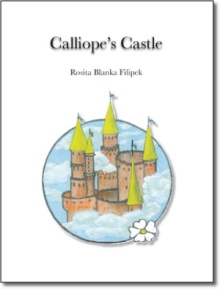 What you will learn in this cookbook? How does it differ from other ones?

When I had severe MCS (Multiple Chemical Sensitivities) and food allergies (they often come together), I learned about which foods I could eat safely. This book contains recipes made only with these safe foods. You will own over 320 recipes tailored to your needs:
* They are not complicated, not time and money consuming and do not require any hunting for extraordinary ingredients. You won't be lost in many words reading them.
* You will be given recipes with kamut, quinoa, millet, buckwheat, barely and amaranth as alternatives for the allergenic wheat.
* You will find a recipe for baking powder and egg substitute. You will learn which type of eggs may be safe to eat.
* As an alternative for allergenic pork, chicken, beef and shellfish, you will find scrumptious recipes for lamb and a few kinds of fish that nobody is allergic to.
* You will be happy to learn of dishes and drinks made from goat's milk and cheese, which test good for people on the strictest MCS diets.
* For sweeteners, you will use healthy non-allergenic maple syrup, and later, honey. According to Dr. D G. Williams, "sugar is slow suicide".
* While other "allergy cookbooks" offer recipes with unhealthy margarine and oils (because the authors so not have a clue about their potential harmfulness), you will use healthy, absolutely non-allergenic virgin olive oil.
* You will still be enjoying corn. That is - blue corn - as a replacement for the genetically modified (GM) corn.
* You will learn about the hazards of GM foods on the market today, which of them you might already be buying, and which are being prepared for the market.
* You will find out by simple inexpensive test which food you can tolerate, which foods strengthen you and which ones are poisonous to your body.
* You will learn about a recent major medical discovery on page 61.

Do you own a whole row of cookbook, and yet, you do not know what to cook? I found myself in this situation a few years ago. I was seriously ill and on a very restrictive diet. I was allergic to most foods and all chemicals.

I went through an impressive row of my cookbooks, but found only a few recipes in each cookbook, that I could use. Why store something I did not need? I took my scissors and went to work. I cut out few recipes from each book which could modified for for my diet. Except for my cookbook: "Roister Blanka's Bohemian Recipe Collection", which I made earlier, the rest were discarded.

For wheat I substituted healthy kamut, barely, amaranth, quinoa, millet, buckwheat, and rice. I have replaced cow's milk products with goat's milk products (No mad goat's disease yet!) For sweeteners, I used maple syrup and honey. For meats I used fish and lamb. I found substitutes for eggs and baking powder. My second cookbook for the sick times was born!

Why was I, together with an increasing amount of people, so allergic? I thought, for the first time in my life, about the tons of chemicals which are being dumped into the air, water and food. I thought about pesticides cleaning supplies, detergent and personal care items I was using. They were full of toxic chemicals.

I identified "the last straw that broke the camels back". It was a tiny leak of gas in our house and mold.

I subscribed to "Our Toxic Times". I immersed myself in deep studies on the subject. Instead of products with chemicals, I started to use natural products. I started to flee from any chemical scents.

It took no longer to identify the other reasons for my allergies. More and more of our food is being genetically engineered. It contains anything from fish genes to human genes! The genetic engineers are playing a dangerous game with God's perfect creation. (Should we say- with "the perfect creation of one unique couple: Brainless Mother Nature and Blind Force Father Evolution"?)

For example: It is common knowledge, that the genetically modified Monsanto white skin potato is legally registered as a "pesticide". It does kill potato bugs. People are eating pesticides without their knowledge! No wonder people get sicker and sicker! Unfortunately they are unaware of these facts.

As if it would not be enough, the Monsanto scientists engineered this potato with a gene called "The Terminator". This means that the potatoes would not sprout the next season and farmers would buy potatoes for planting from Monsanto again.

This way, starting with potatoes, Monsanto could have complete control over our foods supplies. What will happen, when the Terminator spreads by pollination to other plants and to wild plants?

Monsanto did not stop here. The article "Monsanto's Genetically Modified Milk Ruled Unsafe by United Nations" explains, why the European market will not except milk from the USA. They do not want anything to do with Monsanto's "Round up Ready Beans" either.

The FDA ruled that GM foods are not to be labeled! (It is a public knowledge, that some of the high officials in the FDA used to work for Monsanto.) A flood of other GM foods are being prepared for our market. This is why people are increasingly allergic to foods!

For example: Pollen from GM (genetically modified) Bt corn drifted into milkweed. It killed most of the feeding larvae of the Monarch butterfly. (The IMP PRACTICIONS, july 1999, Vol. 21 (7):(17). This Ohio study found that Bt treated crops provoke immune changes in crop pickers and handlers, indicative of developing allergies.

Some fish are GM with human, cattle and rat's genes to increase their growth. Plants are getting "antifreeze" from flounder. Tobacco os GM with human genes to manufacture human blood clotting factors. GM corn, sold in Britain, contains an antibiotic resistance gene. It is so powerful, that it may degrade antibiotics in human stomach in 30 min.

Scientists are trying to GM other species with human genetic traits, including human behavior. Transgenic animals, chimeras, are being born, sickly and suffering. Some mice are GM with the human AIDS virus in their genetic code. Should they escape and mate with other mice, AIDS would be out of control.

You can not recall Gm crops. They contaminate the rest of the plants by pollination. It could create a famine. The book "Farmageddon" describes the dangers of modern agriculture. Another one, "The Last Harvest", describes the genetic gamble that threatens to destroy American Agriculture.

People are next. They are being cloned now. If this will not stop the sacredness of life will cease. What might happen? There might be clones for spare parts, babies nobody wants, a Superior race on one side, on the other, those who nobody wants to raise, to employ, to marry, to insure. Cloned soldiers and slaves might follow. Genetically engineered bioweapons, which could kill millions in a days, may be next.
Read my book Calliope's Castle" ISBN:1-4120-0955-3, www.trafford.com

From all the information we are getting, we see that whatever foods are not GM, they are ruined by irradiation. The irradiation by nuclear waste have powerful friends in the food processing, nuclear industries and medical establishments. Also, the FDA is planning to remove all current labeling requirements for irradiated food. It is said that irradiation destroys much food value, live enzymes and vitamins. Irradiated foods have a long shelf life, because smart microbes and bugs won't touch such foods. Europeans are not kept in the dark either. Some refuse to buy irradiated food from the USA>

Blanka Filipek is a retired Czech schoolteacher, who developed Multiple Chemical Sensitivities 5 years ago. She was very, very ill. Recently, except for running away from perfumes and other chemicals, she leads a normal life and her health is improving all the time. She enjoys traveling, swimming, writing, chess and scrabble. She teaches skiing on Big Bear Mountain Ski Resorts in California.