Lep and the Dirty Synapse

Conversations With God's Little Helper, or Almost Everything Explained 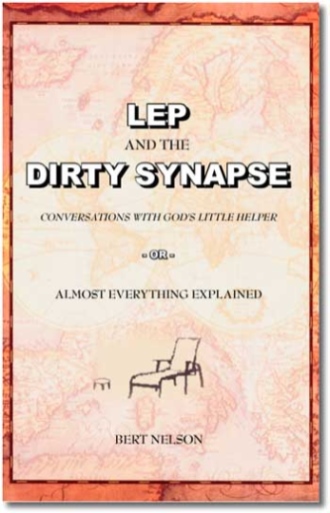 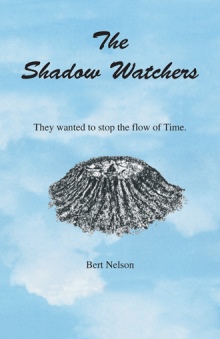 So there I was sitting on the patio one summer afternoon, feeling a bit lazy, close to dozing off, when I was nudged in the ribs.

I looked around, and there, to my astonishment, stood a jolly little man trying to get my attention. I rubbed my eyes and shook my head in disbelief but when I looked again he was still there, grinning at my confusion.

Now that he had spoken, and showed no sign of disappearing. I looked at him more closely. The first thing I thought of was Santa Claus--a miniature version. He was only about 3 feet tall, and was flashing the jolly good-natured smile that we associate with Santa, but I quickly revised that first impression. He did indeed have a round ruddy face and a trim little beard but he was dressed like the chairman of the board of some big bank: immaculate pin-striped navy blue suit, dark tie and spiffy black clothes.

"Well, haven't you been asking a lot of questions about Creation and wishing you had the straight goods?"

"Well, here We are! Right from the source. So ask away."

"I see. You're God...or at least his little messanger." And I burst into laughter. Either I was having a sensational dream or this was a really dandy hoax.

The smile vanished and the sudden anger on his pudgy little face put a bit of a fright into me.

"I wouldn't laugh if I were you. We don't make many house-calls and when We do We expect respect!"

Between chuckles I managed to say: "I don't know who sent you, but when you report back tell them that, even though I have been drowsing in the sun, I'm wide-awake enough to know a gag when I see one."

He gave me a long hard look and said, "That does it!"...and before I could blink I was gone...straight down...dropping into the centre of the earth and getting hotter by the minute. Suddenly, the falling hesitated, and then stopped. Just as I was about to start screaming because of the burning heat I began to ascend at a furious rate. The afternoon sun felt positively cool on my return to the patio.

The little guy looked at me and said: "Well, how do you like this part of the hoax?"

"I thought you said you came from God. Devil would be more like it!"

"No, no! You know the old expression 'you can go to the devil'. Well, that's where We were sending you. You were questioning My authenticity and I needed to get your attention. Now, do you want to talk to Us or do you want Us to leave?"

"Stay. I certainly have lots of questions. Are you God, or God's agent?"

He sighed and said, "'Both' is the right answer but I can see how that might confuse you. I sometimes forget to explain things before I pop out a quick answer. Tell me Bert...when you talk to me you use your tongue to voice thoughts: is that you speaking or is it just your tongue wagging?"

"So, when we talk together it's either two tongues babbling, or two minds communing, or maybe it's both."

"I think I understand. Assuming that you really are God, or speaking for God..."

He rose up to the full extent of his 3 foot stature and gave me a very hard look and said: "I'd be very careful if I were you. You know what happened the last time!"

And that's how it started.

Before he left that first day I said:

"I hope this won't offend you but I feel as if I'm chatting with a leprechaun in a business suit."

He was gracious about my comment. He explained how that had happened and said:

"No problem. Just call me LEP...short for leprechaun...but don't forget who We really are."