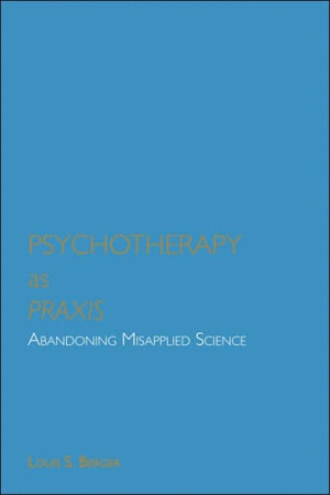 For over thirty years, Louis Berger has challenged and criticized psychotherapy's scientific ambitions and claims. However, while most critics of the mental health field typically have maintained that what was needed is more and better science, the author, surprisingly, recommended just the opposite: psychotherapy should rely on science less. This recommendation, based on Dr. Berger's extensive clinical and technical-scientific background, links up with the past century's many recurring criticisms of "rational-calculative" thinking in general. Major figures such as the philosopher Martin Heidegger have pointed out that all too often in Western culture, the scientific world view and its attendant practices - "technology" in the broadest sense S has been and continues to be dangerously misapplied, used in the wrong areas with destructive results.

In two earlier monographs and more than 40 journal articles, Dr. Berger had presented critiques of the mainstream, scientifically-oriented psychotherapies ("technotherapies), and proposed alternative approaches. The present volume enlarges on these earlier efforts by introducing a new ingredient: Aristotle's idea of praxis. This complex, unconventional, unfamiliar concept, only very distantly related to our contemporary notion of "practice" (as in "theory and practice") , was intended by Aristotle for use in those disciplines where scientific approaches are inadequate and unsatisfactory. The author asserts that psychotherapy is one of these disciplines.

Aristotle's general ideas about praxis are integrated with unorthodox aspects of psychoanalysis to yield a praxis-based psychotherapy, a clinical praxis. A detailed example is presented which demonstrates the advantages that such a praxial psychotherapy has over therapies that presumably are grounded in scientific thinking and research.

The final chapter, "Bringing about change," includes a discussion of the potential that the praxial approach has for being used in other important applications. It indicates that suitably modified generalized versions of a clinical praxis could be brought to bear, for example, on societal conflicts (including those that may be raised in the mental health field by the introduction of a non-technological, praxis-based psychotherapy), or on philosophical problems. Thus, Psychotherapy as Praxis is a multifaceted work that operates on a constellation of levels S clinical, cultural, and philosophical S and consequently will interest generalists as well as readers from diverse disciplines.

Louis S. Berger's rich professional life spans the fields of clinical psychology (Ph.D.), engineering (B.S.E.E.), physics (M.S.), and music (M.M.). Formerly he has been on the faculty of the Department of Psychiatry and Behavioral Sciences, University of Louisville School of Medicine, the Staff Psychologist at Southwest Research Institute in San Antonio, and consultant to various mental health and forensic organizations. He also has an extensive research background in applied physics and biomedicine, and for a decade was a cellist with the Boston Symphony.

Dr. Berger is the author of Substance abuse as symptom: A psychoanalytic critique of treatment approaches and the cultural beliefs that sustain them (The Analytic Press, 1991), Psychoanalytic theory and clinical relevance: What makes a theory consequential for practice? (The Analytic Press, 1985), Introductory statistics: A new approach for the behavioral sciences (International Universities Press, 1981), and numerous journal papers and book reviews. Currently he is in private clinical practice in San Antonio, Texas.