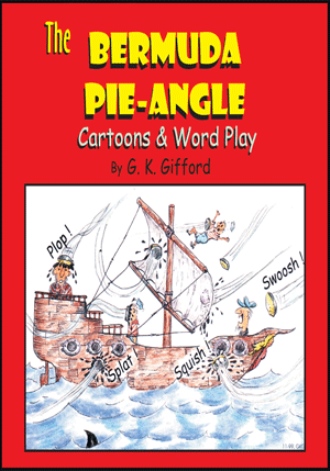 In real life, G.K. Gifford nearly drowned in the Bermuda Triangle after hitting his head on a submarine. He survived to bring us this entertaining book. From the illustrated pages within, you can learn the answers to...

Welcome to the Bermuda Pie-Angle!

G.K. Gifford is a former sailor who was recently saddened to learn that his submarine, the U.S.S. Sea Devil, had been gutted and is lying in a scrap yard. He has fine memories of his navy days, many of which were spent in the Mediterranean

Gifford has an MBA from Lake Erie College and a BA from Kent State University where he studied, amongst other things, Television and Radio Productions, Linguistics, Art, Music, and Existentialism. After graduating from Kent State, he desired to write sitcoms and movie scripts, but ended up making video training tapes pertaining to specialized propulsion systems. Later, while getting rejection slips for science fiction stories, he was asked to write companion manuals to the tapes- and thus he fell into the strange world of technical writing... never to escape.

Outside of work, he likes to draw, write, play guitar, and harmonica. He founded the Wildwood Chess & Strategy Games Club and enjoys playing such games as Chess, Shogi, Xianqi, Conquest, and Go.

He lives near Cleveland, Ohio, with his wife, four children, and a 9-year old hermit crab.