Under The Vietnam Flags 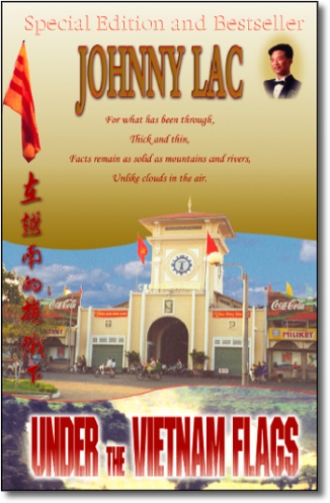 This was the long war that my life has walked in - a long journey that I & other people made under the Vietnam regimes, during the Vietnam War, the Terror War, & the under the forces of the Communist government. Even today, it is unforgettably tragic to remember April 30, 1975 the day of Saigon's fall, & what followed when the War was over.

Vietcong cadres were outlawed. A violated peace engulfed the center of South Vietnam. Both the North & South Vietnamese people had poured out their blood & their treasure to fight in the war. The people in the south were compelled to come together to fight what always appeared to be overwhelming numbers from the north.

In the aftermath, an internal war out of the view of television cameras began in the South. Once known as soldiers, civil servants, intellectuals, artisans & business merchants, the communist socialist government renamed them capitalists & bourgeoisie. Property was seized. Businesses were destroyed, confiscated or nationalized. A torrent of ideological euphemisms swept over the country. Re-education camps were established for the powerful or the skilled. Thousands more were forcibly marched into so-called new economic zones in the jungle. Against the ideological tide pulling people landward, a steady stream flowed seaward. Through a black market of go-betweens, smugglers, gold, diamonds, & dank cargo holds, the stream flowed.

From 1975 to 1985, thousands set out to sea in leaking boats. Waiting off shore, pirates swarmed the unsuspecting boats. Murder & rape joined robbery as the standard ritual. Whenever pirates left, the others came. Thousands more perished. Awaiting those who survived the sea journey were the refugee camps. They had to wait many years before they could be resettled in the west.

However, in the era of historic Vietnam today & the future, there are big changes in peoples' lives & better life for a modern living because of doi moi plans for improving things under the Socialist Republic of Vietnam!

The word Vietnam is well known since it had a long war. Just think of the fall of Saigon on April 30, 1975, it is unforgettable because it was tragic. Everyday, people see movies, watch television shows and read books about Vietnam as the stories are endlessly fascinating.

This is a true story of my near death experience while escaping from Vietnam. I searched in the library for books about Vietnamese history, so that is where some of my knowledge comes from. The story of my journey and eventual settlement in Canada began in the spring of 1980. I am a worker in Environmental Services Department. During my shift with a group of peer workers in a peer tutoring program at British Columbia's Children's Hospital in Vancouver, British Columbia, Canada. My tutor would routinely ask me to talk about my experiences, to help me improve my English. Thus, I came up with the idea of writing this story.

Forced to remember events I had long since suppressed, it was then I decided to unpack the notes I had taken. I kept a daily record of my thoughts and experiences from the time I began my escape from Cholon on May 27, 1979. A simple learning tool at first, the journals became the foundation for a more lengthy explanation of my long struggle to escape post-war South Vietnam.

I am especially grateful to my friends Max Lomas and Don Payzant volunteer tutors and friends from the Hospital, for their helpful suggestions and proofreading skills.

It gives me a great deal of pride to write my first book in English about my life. This book also includes three poems written by my children. The poems "Peace" and " the Gift" written by my son Jay, when he was nine, and " Children" written by my daughter Kay, when she was eight, are written to all parents, children and people of the world. All three poems were originally published in 2000, in The Voice of Overseas Chinese, in Taiwan.

My own poems, " The song of the Life Where We Are ", and " Our Past " dedicated to all the Vietnamese refugees and fighting people in the world are included in this book, first appeared in The Voice..., in December of 1999. The photographs and illustrations help the reader understand the natural beauty of Vietnam, and my sadness when I was forced to leave it all behind.

Growing up in a peaceful country like Canada it is easy to take peace, good health and happiness for granted. Yet, millions suffer through war, illness and famine around the world. My thoughts and prayers are with everyone for whom peace is elusive, and for the hope that it will become more bountiful in the future.

Thank you finally to all those who have supported me since my journey began. I wish you peace and joy.