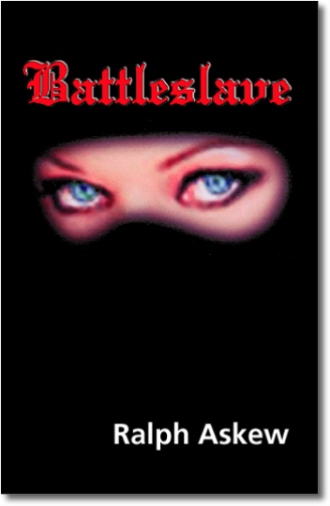 Battleslave is about a planet that artificially produces beings for the purpose of fighting wars. These beings are called battleroids, and they are trained without emotions or feelings for anything or anyone other than Galaxy. Chrisinda was born Port Arthur Battleroid 288306442 or PAB288306442 and during her spare time, which was little, she dreamed of being a normal. At the age of 13, she met Christina who was a normal girl who dreamed of being brave and courageous like a battleroid. They became very good friends from the beginning. Christina told Chrisinda about the normal world, and Chrisinda taught Christina how to be brave and courageous.

At the age of 15, Christina took Chrisinda in to the town of Port Arthur, which was in itself illegal, but it was early in the morning and they hoped that not too many people who would see them. While in town, they met a group of boys led by Jerry, one of Christina's classmates. Jerry disliked Chrisinda right away, and their confrontation erupted in a fight which took the lives of seven of the boys. Chrisinda was arrested by the local authorities who were forced to surrender her to the military after a long legal battle. She was courts martialed by the military, found guilty and given the death sentence to appease the local civilian population.

Chrisinda was transferred from Port Arthur Breeding Encampment to Desert Canyons Heavy Infantry training Facility where she was brutally beaten and raped by Sergeant Stephane who then turned her over to his mabutu soldiers for their pleasure. After she recovered from the rape and beating, she joined the incoming regime of battleroids to be trained as heavy infantry. The life of a heavy infantry battleroid was short and brutal, and it was Chrisinda's job to see that that did not happen to this regime.

After a Marine Corps style boot camp, the regime went on its first perimeter march where they lost over 250 battleroids in two separate air attacks. They were told the perimeter march was under combat conditions and all aircraft were to be considered hostile. A lesson they learned the hard way. Chrisinda took control of the regime and they were able to defend themselves against the air attacks, but there was nothing they could do about the artillery barrage, which was constant.

The second phase of their training took the regime to Desert Plains where they were taught how to maintain armored vehicles and weaponless defense. During their weaponless defense classes they will have to kill their opponent until the end of that phase of training. This phase of training meant that they could continue to resist when they were out of ammunition and nothing else worked. It was during this phase of training that Chrisinda discovered the demons the battleroids of her regime where carrying. Many of them suffered sexual and physical abuse at the hands of their trainers. Chrisinda could feel her love for them deepen as she felt their pain, and the healing process began. The regime completed that phase of training without loosing one battleroid to their opponents.

Their third phase of training was conducted at Flat Plains Armored Park under Colonel von Brandenberg who served with Galaxy Forces for over 15 years. The training at Flat Plains was rougher than it was at Desert Canyons. During the armor demonstration on the service range, Chrisinda's fear of loosing more battleroids began to grow. Watching the live fire demonstrations, she knew that the demonstrators were not being fired at, but they would. During an exchange of large caliber weapons, someone will get hurt, which meant that she would have to be rougher on her regime than her trainers.

Chrisinda went through a combat simulator called Valstakt, which tested her to her abilities and beyond. She had to make decisions she never dreamed of making, and she had to contend with the deaths of her battleroids which she could not stop. After she completed the more than six-week simulations and her recovery in the base hospital, she insisted that every battleroid in the regime go through Valstakt. She smiled as she thought to herself it would take them a very long time before they thanked her for it.

Ralph Askew was born in 1937 in Cleveland, Ohio. He spent a total of 10 years in the Ohio National Guard, the California National Guard and the United States Marine Corps where he developed an interest in military history. After graduating from UCLA, he joined the LAPD where he spent most of his patrol time at the Newton Street Patrol Division as a training officer. He retired from the police department after 21 years. Battleslave is his second novel. The first one is still unfinished. Mr. Askew currently lives in Hawaii as a retiree.