Spirituality and Energy at Work 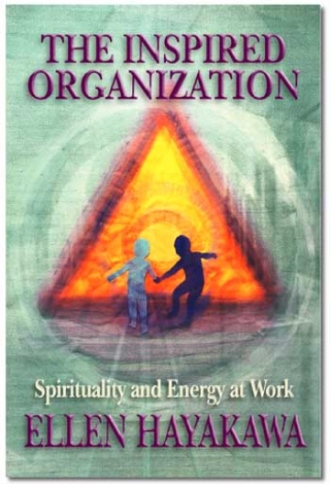 "Deeply authentic and straight from the soul, The Inspired Organzation: Spirituality and Energy at Work combines heart and wisdom with practical, useable ideas. It opens enormous possibilities for a new way of being at work."

Martin Rutte - Co-author, Chicken Soup for the Soul at Work

Today, many may ask, "What is my work and what am I building through my labours?" There are few more critical development needs in the modern world than aligning the two and few more useful starting points than Ellen Hayakawa's book."

The Inspired Organization: Spirituality and Energy at Work is the ultimate guide to building a rich spiritual relationship with your everyday world of work. It is an exciting, valuable tool to bring forth the richness of your Spirit and to create a meaningful life by expressing your passion, gifts and talents in your work. Thought-provoking text, examples and useful exercises help you to discover and live your personal vision of work as well as the co-creative vision of any team or organization that you are a part of.

The Inspired Organization has the potential to change your life. It opens the door to a peaceful, sustainable future for all. Whether you are an executive or an entrepeneur, whether you work at home or in a business, government or institution, you can apply the creative and practical ideas presented in this book to express your spirituality and energy at work.

An internationally renowned keynote speaker, workshop facilitator and corporate coach on Spirituality in the Workplace, Ellen Hayakawa has worked with executives and employees in both the public and private sectors exploring the relationship between spirituality and energy in the workplace and sustainability. Her clients have included Environment Canada, Health Canada, Heritage Canada, The Public Service Commission, The Treasury Board of Prince Edward Island, Seagull Pewter and The Canadian Centre for Management Development as well as coaching CEOs and executives to align their businesses with their spiritual path.

Ellen has been interviewed about her work on national radio by CBC's Morningside and on national television on programmes such as CBC's Alive with Joyce Resin and Vision TV's Skylight. She was one of the ordinary creative geniuses featured in the book called The Fiery Muse: Creativity and the Spiritual Quest by Teri Degler.

Ellen Hayakawa is also a keynote speaker about The Children and Youth of Peace, also known as The Indigo children. She works with these children and their parents as a personal coach and mentor as well as a workshop facilitator for groups. These children and youth have highly developed psychic and intuitive abilities. The kind of psychic phenomena that they demonstrate have been described only in the realm of science fiction such as X-men or books such as Harry Potter or in the indigenous world as the shaman and medicine people. In reality, children and youth who have such abilities are now everywhere on the planet.

For example, Ellen works with many who can "read" books, magazines, and photos without using their eyes. Some of the children read auras and pick up psychic impressions about people from objects. Many have extraordinary gifts such as clairvoyance, clairaudience, clairsentience, prophesy and others yet to be discovered. Through coaching and workshops, she helps them to discover their gifts and apply them in their lives. The Children and Youth of Peace will lead the way in this millennium, bringing hope, healing and peace to our planet. Her next book will describe her work and experiences with them.

For more information see Ellen Hayakawa's website at www.EllenHayakawa.com or the Centre for Spirituality and Sustainability at www.centreforspirit.net