There is No Box! 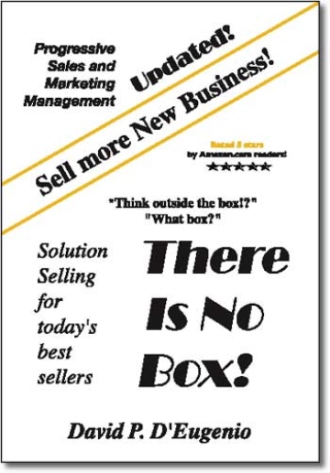 There is not an easy method of sales success. Selling is one of the most difficult professions requiring mental toughness and optimism.

Selling is both and are and science; and the science is more psychology and sociology than technical. The art is in the presentation, and the technical is in the information that is vital to selling. How you wrapped that information is as important as what you present. How you execute the skills you have learned determines your success.

The information you will need to improve your career in sales and marketing and to give you a sense of confidence is in this book. Selling is a sport you have to practice to be great.

Long-time south Florida broadcaster David D'Eugenio is a former vice-president and general manager of eight South Florida radio stations owned by Clear Channel Broadcasting, the nation's largest broadcaster. David began his career at the suggestion of Mike Wallace of CBS's "60 Minutes." In 1977, he began his broadcast career at WTVJ, CBS TV Miami. In 1980, he graduated form the University of Miami while working at the nation's most prestigious CBS News stations, WTVJ. After three years working in various departments, David found his forte in sales and eventually station management.

During the last 12 years, David has specialized in operations, mergers and start-ups and has been a director of sales, a director of national sales, as well as a local and regional sales manager. His expertise includes outside local, regional, national sales, all levels of marketing and executive management for a variety of successful companies including American Radio Systems, OmniAmerica Group, Fox TV, Malrite Communications Group and Clear Channel Broadcasting.

Later, after three years of managing industry consolidations that included six ownership transactions and consolidations, David returned to NBC 5 to concentrate on sales for the Summer Olympic Games. During 2002, David Wrote and published two books, There Is No Box! and There Is No Box, The Workbook. They are training textbooks for account executives in media and the service industries.

A few career highlights include Broadcasting's 1996 General Manager of the Year, the Florida Reef Foundations's 1997 Man of the Year, The Palm Beaches' 1995 Man of the Year, program assistant to Chet Forte for "Monday Night Football," "Wide World of Sports," and the nationally syndicated program "disco Magic." He also participated in the development of South Florida's "the 10 O'clock News" and was a member of the sales advisory Committee for the NFL for the FOX-Television Network. David was also featured in Palm Beach Illustrated magazine.