The Biblical Book of Job 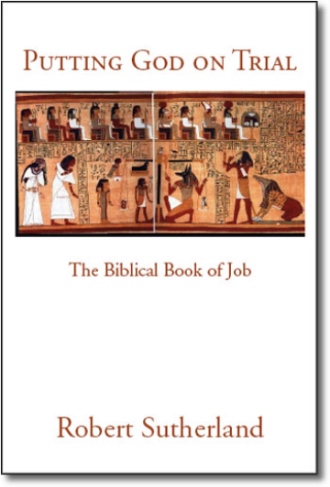 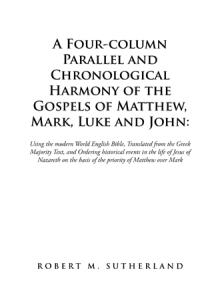 A Four-column Parallel and Chronological Harmony of the Gospels of Matthew, Mark, Luke and John:
Robert M. Sutherland
$31.99

Many scholars find the legal metaphor of an Oath of Innocence inappropriate, though for different reasons.

Some liberal scholars opt for an aesthetic, not a moral, resolution of the question of evil in the world. They find a sublime beauty in God's review of the animal and physical worlds, Behemoth and Leviathan. But that is all they find. They find no suggestions of moral purpose in God's creation and control of evil. Indeed, they feel none could be forthcoming. God is beyond good and evil so no moral resolution is possible. Since no moral resolution is possible, a legal mataphor such as a lawsuit dramatizing the moral question is inappropriate. They interpret Job to understand that position. And they interpret him to retract the lawsuit in its entirety.

This author feels such liberal scholars miss a moral resolution for five reasons. (a) First, they fail to give adequate weight to Satan's first speech in heaven setting out the moral solution. (b) Second, they misinterpret Job's struggle with God to be a request for a restoration of his former position, rather than a request to know the reason behind evil in the world. (c) Third, they fail to appreciate the moral restrictions under which God has to operate. God cannot reveal any moral answers directly without defeating his very purpose in the creation and control of evil. As a result, they miss the suggestions of moral purpose in God's two speeches and the inferences God would have Job draw. (d) Fourth, they fail to fully appreciate the legal dynamics of the enforcement mechanism of Job's Oath of Innocence. In particular, they fail to appreciate the distinction between causal responsibility and moral blameworthiness. Thus, they do not understand God's comments concerning vindication and condemnation in his first speech to Job. And they do not understand Job's hesitation to proceed beyond his own vindication to a condemnation of God in Job's first speech to God. Ultimately, they fail to see Job's adjournment and continuation of his Oath of Innocence implied by the allusion to the story of Abraham and Sodom and Gomorrah in Job's final speech. (e) Finally, they fail to give full expression to God's ultimate judgement on Job. Job and only Job spoke rightly about God. In the face of such a judgement, there is no room to deny the ultimate propriety of the moral and legal question as a way of framing man's encounter with God.

Some conservative scholars opt for a moral resolution of the question of evil in the world, but their resolution is equally unsatisfying. They interpret Job's so-called excessive words and his Oath of Innocence to be sins of presumption. Thus they would have Job retract his lawsuit in its entirety and repent morally for either his so-called excessive words, his raising of the lawsuit or both.

This author feels such conservative scholars miss a satisfactory moral resolution for three reasons. (a) First, they fail to understand the depth of Satan's challenge to God. It is not merely that Job will curse God. It is that God is wrong in his judgement on Job's goodness. God missed sin in Job's life. Such scholars think their moral resolution is possible, because although Job sins, Job does not actually curse God. Their resolution actually makes Satan right in his challenge of God so that God should step down from his throne and destroy mankind. (b) Second, they fail to give proper weight to Job's blamelessness and integrity. The raising of the Oath of Innocence is an expression of that blamelessness and integrity. It is what God expects of Job, though he cannot tell him that directly. (c) Finally, they fail to give full expression of God's ultimate judgement on Job. Job and only Job spoke rightly about God. In the face of such a judgement, there is no room to attribute sin or wrongdoing to Job for either his so-called excessive words or for his Oath of Innocence.

My personal interpretation charts a new middle course between these two-fold horrors: a liberal Scylla which places God beyond good and evil and a conservative Charybdis which attributes sin to Job, either for his so-called excessive words, his Oath of Innocence or both. God has a moral reason for sending evil . Man has a need and a right to know that reason. But God need not provide that reason here and now. An adjournment of God's trial to the day of the Final Judgement and its continuation then is strongly implied. It is implied through the allusion to Abraham, through the allusion to a Redeemer who stands up in court at the Final Judgement to plead Job's cause and through the allusion to the apocalyptic destruction of Leviathan at the Messianic banquet and the explanation of all things that follows. The legal metaphor is highly appropriate. A satisfactory moral solution is only possible because of the distinction between casual responsibility and moral blameworthiness embedded in Job's Oath of Innocence. That distinction is central to the criminal law defense of justification or necessity. God may be causally responsible for the evil in the world, but not morally blameworthy for it. He has a necessary and sufficient reason for the evil and will ultimately give it. Job grants him that time without denying his need to know and without withdrawing his right to know. This resolution preserves the moral integrity of both God and man.

I am a Senior Fellow at the Centre for the Study of the Great Ideas, (www.thegreatideas.org), an American think-tank based in Chicago. I owe an incalculable debt of gratitude to its founder Mortimer J. Adler and its president Max Weismann for their writings and their advice. I would not be the person I am without them. In and through their mentorship, I have become rationally persuaded of the truth of natural law ethics and Thomistic metaphysics. Both have profoundly influenced my understanding of the scriptures. This moral background has given me a deep appreciation of the moral dynamics in The Book of Job.

I would describe myself as an evangelical Christian, though not a fundamentalist. I believe the traditional doctrines of Trinity, Incarnation, substitutionary atonement, bodily resurrection, heaven and hell. I am denominationally Anglican, as much by temperament as by default. I value the high value it places on human reason. As I searched for a spiritual home, the Reverends Joan Mitchell and Ed Swayze successively welcomed me into their home, St. Stephen's Anglican, Thunder Bay. They regularly encouraged my writings and preaching and I owe them a profound thanks. Years ago, two professors, Dr. Richard Berg of Lakehead University and Dr. Don Thompson of Laurentian University, read my early preachings on The book of Job and strongly suggested I publish. I have ignored their sage advice for too many years. I now offer this book, in part, as a memorial to their good friendships.