a Bronx Buddha's Guide for Living Your Best Life

by Marvin A. Ehrlich 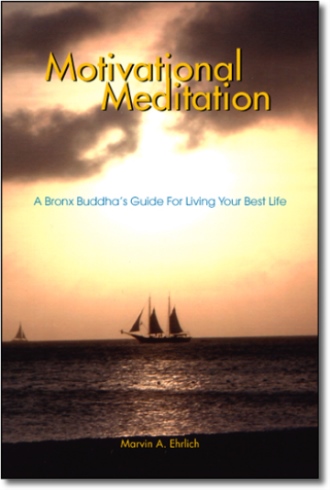 The times in which we live warrant a renewed search for inner peace. As always, we seek out those tools that will assist us in clearing away the emotional clutter in our lives- that which hinders us from living the best life we can live. Motivational Meditation is a method for centering your mind and body- allowing you to discover the person you were meant to be, create your own inner peace, and live your best life.

Author Marvin Ehrlich (aka the Bronx Buddha) recounts how his life experiences- from his beginnings in New York City, to his career in the financial industry- led him to the practice of Motivational Meditation and describes his personal journey in search of peace.

Motivational Meditation: a Bronx Buddha's Guide for Living Your Best Life is a life-affirming, upbeat look at the human condition. It strives to show the reader how "the best" is already inside of them and how they can achieve peace within their own life.

When done correctly and consistently Motivational Meditation will help you affect change within yourself: filter out the noise to manage stress, find inner peace, communicate effectively- and allow you to live your best life by being the person you were meant to be. Most importantly, the goal of the book is to help you strip away the stressful, unimportant things in life leaving only the most important things: loving and being loved.

Marvin (Chip) Ehrlich was born in the Bronx, NYC in 1948 and spent most of his early life in the city. In 1967, while stationed at the U.S. Naval Security Group in Winter Harbour, Maine, Marvin met his wife of 35 years, Laurie. Since then his family has grown to include two daughters, two sons-in-law, three granddaughters, and a female dog.

Marvin began his career as an Official Court Reporter working first with the Bronx District Attorney's Office then moving into the Superior Courts for the State of Maine. In 1977, Marvin moved his family from Maine to New Jersey (the reason for which is still a matter of family dispute- fabulous job opportunity vs escaping Maine winters)

After a transition into the financial industry in 1982 (an injury to his hand had abruptly ended his court reporter career), Marvin began a career as a stockbroker, working his way up to Corporate Vice President with a major brokerage firm.

In addition to advising clients, Marvin is active on the speaking circut, conducting seminars on financial preparedness for both the general public and financial professionals.

Since becoming certified for teaching meditation he has taught several classes and continues to counsel people in learning to live their best life.

Marvin still resides in New Jersey where he enjoys sailing, golfing, and spending time with his family.