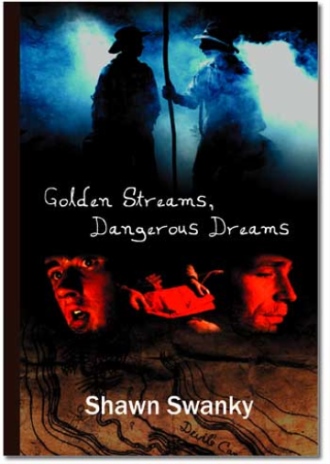 The novel, Golden Streams, Dangerous Dreams, is the same story Shawn Swanky, and the Dragon Heart Pictures production team, made into a feature length movie in the summer of 2002.

After hearing about the GSDD project, or after seeing the movie, so many people found the underlying story so entertaining, enoyable and interesting, that they began asking for copies of the script to read. Screenwriter/director Shawn Swanky responded with this fascinating short novel. Fast moving and easy to read, it features all the personal conflicts, the vivid sketching of competing visions, and the escalating drama that left people enjoying, and thinking about, the movie for days after leaving the theatre. Rarely ever has a young author packed so much story and wisdom into such a short space.

Will the Anderson brothers discover Jim Richmond's buried treasure, and emerge from the gold rush rich as princes? Will the innocent Thomas be pulled along as his older brother takes ever bigger, and increasingly more questionable, risks? Will Paul realize his dream, or will he go mad from hurried hope and hot desire? Will the constable arrive in time to save Claire, Jim's fianc;eacute;e, from becoming another gold rush casualty at Paul's hand? And, then, among all these characters competing for the gold, there is also an ever deepening conflict between different visions of what makes a human being rich, truly rich, and about "...what it takes" to become rich. In the end, it is this conflict that might see Thomas either dead, or emerging from Devil's Canyon a rich man.

GSDD is about the hope of living one's life as one who is rich. It is about trying too hard to realize a dream, and it explores what it means to be a "rich" human being. Although set in gold rush Barkerville, it is a universal story, one re-enacted in many settings, in many times, and even in our own time. The digital revolution, and the advent of the Internet, is only the most recent example of a major gold rush. In such an event, being first, having dumb luck, making a fortunate choice, or any combination of these, rather than hard work, diligence, discipline or knowledge, are most important in determining who has the chance to become disproportionately rich. These riches flow first to those there to seize them, not to those who would earn them, deserve them or know best how to use them. And, then, it seems most of those who grabbed the gold begin to loose it. Thus, the legacy of a gold rush is equally as well measured in the grotesque distortion of lives endured by so many participants, and their families, as it is in terms of the wealth created.

"A story teller's first job is to entertain," Swanky says. "It has been gratifying to have so many people tell me Golden Streams, Dangerous Dreams made them both laugh and cry in the two hours it takes to read the book or watch the movie."

Shawn Swanky, one of Canada's talented young moviemakers, was born in Edmonton, Alberta, and completed his secondary schooling in British Columbia in June 2001. A moviemaker since 14, Swanky has already had movies shown at international student and youth film festivals in Los Angeles and Toronto. In 2002, Swanky created the Golden Streams, Dangerous Dreams story and turned it into both a novel and a feature length movie, which he co-produced and directed. During 2003, he will be a student in the digital film program at the Vancouver Art Institute's Centre for Digital Imaging and Sound.