Notes from an Airborne Rifle Company 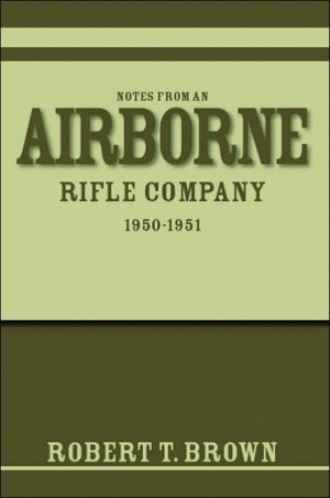 A collection of 22 independent by related sketches based on experiences in an airborne rifle company during the first year of the Korean War, this work should not be considered a war memoir. Rather, most of the episodes collected here might better be considered works of fiction, even though all are based on fact to one degree or another. Many of them are based on material in letters home, but the letters are mostly very brief. They serve only as a memory freshener regarding the order in which things happened, not the details of what happened. Other stories are based only on memory.

The stories range from attempts at factual reporting (as factual as can be expected some fifty years after the fact), to almost pure fiction. The Hero is a fictionalized amalgam of real events that actually took place several months apart. Dear Jane is a work of fiction suggested by three short sentences in one letter. Night Attack is an attempt at a narrative description of actual events, because the events still seem very clear in author's mind. However, the description of the character is actually based on two people. P'Yongyang Airdrome is a fictional account based on the events of a real November afternoon. The Air force Captain who supplied the bottles really existed, but his name was never known.

Even the description of events that are meant to be factual may not agree with the recollections of others who were present at the same events. Eye-witness accounts of infantry combat can vary widely when reported from separations as small as a few yards. Every man experiences his own war, and the wars are all different. In many cases the attempts at narrative accounts include fictional, but plausible, details, because the memory of actual details has faded.

The most valuable part of the work is not fictional, and that is the record of the shared thoughts and feelings of the men of the company. All the conversations among the troops included here acutally took place. Beer Ration for example, is based on conversations and events that actully took place over a considerable period of time. Christmas Eve, on the other hand, is based on a letter written on that date, and the conversations reported there all toook place within a day or two of that date. MacArthur Visits the Front is also based on a letter, written on the same day as the visit, and is only a slightly expanded version of the letter. In general, the thoughts and feelings of the men of Company B as reported here can be considered accurate, because almost all are quoted in letters home.

The opinions expressed here cover a wide range of subjects, from the very highest to the lowest, including, for example,

If most of the speakers of the actual words quoted here seem to be nameless, faceless voices, it is because that is what they have become after all these years. While in a very few cases there has been an attempt to put together fictional composite characters, in most cases there has not. The voices have simply been allowed to speak.

Robert T. Brown entered the U.S. Army directly from high school at age 17, enlisting specifically for airborne training and for assignment to the 11th Airborne Division, then to occupation duty in northern Japan. After his military service, which included two combat parachute jumps in Korea, he attended San Bernardino Valley College, California, and the University of California, Riverside, and received a Ph.D. in physics from the University of Michigan. Most of his professional career has been devoted to defense-related subjects, ranging from the nuclear weapons program to low-observables technology development. His previously published work has appeared in such places as Physical Review, Astrophusical Journal and Journal of Chemical Physics. He recently retired as an engineering group leader with the Lockheed Martin Skunk Works, and now lives in Chester County, Pennsylvania.