a book for physics, math and computer science students 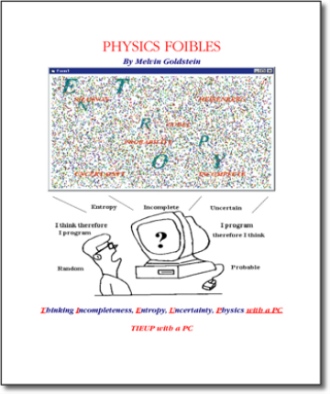 The science of Physics is based on observations that lead to the formulation of mathematical relationships between measured quantities. Some would consider Physics an exact science. Its discoveries and laws are basic to understanding in all areas of science and technology.

1) Kurt Godel proved that there are unknowables in our mathematics.


2) Werner Heisenberg showed that there are uncertainties in our measurements.


3) Entropy says that we can only predict the probabilities of events.


4)Chaos Theory deals with things that are effectively impossible to predict like turbulence and long term weather forecasting.

The word foible as defined by Webster:

An odd feature or mild failing in a person's character
a weakness.
In fencing,
the weaker part of a sword blade.

It is the acceptance of these foibles in Physics that has led to broader understanding. In the process of examining these 'weaknesses' in science, many creative and practical solutions have been discovered.

There are a number of original computer programs throughout the book. No other person, living or dead - other than the author - has edited or examined the programs. No effort has been made to optimize any of these programs. The author has relied on the computer's results to serve as his default editor.

Many have asked about the book. Some with a technical background - and some not - have questioned: What do dice, poker, lotto, and heads-or-tails have to do with Physics?

The mathematical study of games of chance is as old as mathematics itself. The connection between games of chance and Nature's laws can be rigorously refined in the field of Statistical Mathematics. If you can analyze multiple coin flips, you can view molecular distribution. If you can understand the results of a game of Roulette, you can understand Radioactive decay.

Also included are polls, number systems, wave packets, the search for Pi and the elusive Random, Internet quotes, and more. And in the the process of reading, stop and listen to the words of the science gurus displayed in cartoons throughout.

Melvin Goldstein received his BS and MS in Physics from Tulane University. He was president of the Sigma Pi Sigma physics honor society, and graduated with the Elliot Award (given to the outstanding senior graduate in physics). He taught the graduate Electronics Lab at Tulane, and a course in Optics at Xavier University in New Orleans. He was Assistant Professor of Physics at the University of Southwestern Louisiana in Lafayette, where he also performed research in Nuclear Physics.

Professionally, Mr. Goldstein started as Junior Engineer in the Apparatus Division of Texas Instruments, and moved on to be Senior Design Engineer in the Digital Circuit Section. He resigned in order to start TANO Corporation in New Orleans, which grew to design and manufacture automation systems for commercial and military ships. He served as President and Board Chairman of TANO until he returned to Dallas to be President of Eclectic Systems, which engaged in the design of computer hardware and software.

Mr. Goldstein is presently the president of Bonum Corporation in Dallas, Texas.