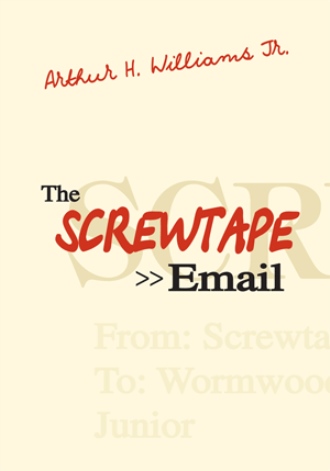 This book is darkly funny as it explores temptation in the classic tradition of satire. Dark as the subject may be, however, grace overcomes evil. That victory leads to hope.

For the purposes of this book, the discovery of Screwtape's email correspondence continues to be a mystery. However, this email adds insight into Screwtape, the supervisor of demon tempters. Screwtape treats the apprentice tempters in the same way that Mr. Wilson treats Dennis the Menace. He has to operate on several levels to maintain his position, his wicked schemes and his ambition. References to his supervisor, Beelzebul, are found in Matthew 10:25; Matthew 12:24-27; Mark 3:22 and Luke 11:15-19. Flaming is the practice of sending resentful comments to an insensitive person who has violated customary practices on the Internet. When someone is flamed, the words that are in capital letters show what is being screamed at the person.

"Black Hole" is a term used in physical science, and it refers to the stripping away of all qualities as an object enters it. Figuratively, it means the loss of all memories of who and whose we are, so that we forget and we are forgotten. The gravity in a physical black hole is so strong that nothing can come out of it, not even light. "The Light" refers to the Light of the World and this Light overcomes darkness. (John 1:4-5) In near-death experiences, people have reported seeing a welcoming light, sometimes at the end of a tunnel.

A warning is in order. Since he is a self-important, bumbling and unfeeling wet blanket, the reader should not be surprised that Screwtape is not nice. Still, what else would be expected of such a demon? He is seeking the greatest harm for the greatest number of human beings. In addition, Screwtape may pull the wool over our eyes about ideas and facts. Therefore, the reader should not assume that what is said here is true, for false statements are of no concern for an agent of the father of lies.

I enjoyed very much the email messages from Screwtape. You keep very well in the spirit of Lewis, but you also address many of more recent currents of the culture and the ways in which people are enticed off course. I think that Lewis would recognize your work as an effective continuation of his own.
W.A.K. in North Carolina

I enjoyed reading it. I had read "The Screwtape Letters" by C.S. Lewis and this book brings it up-to-date.
A.S.E. in Illinois

It contains timeless truths as well as refearences to current events.
C.E. in Illinois

It was fun to read and I got a lot out of it.
R.D.S. in Virginia

"THE SCREWTAPE EMAIL chases the reader from one human situation to another with a great diverse collection of metaphors to illustrate. The first response is, 'Ah, I don't do that.' But immediately the next thought is, 'Well, maybe I do!' The use of hyperboles turns human foibles into humor, so we can endure the images of ourselves, while at the same time it provides a serious warning to beware tricks of the Tempter."
-M.A.O. in North Carolina

Born in Washington, DC, in 1932, the author began school in a two-room country school in upstate New York. In that time before World War II, Niskayuna County was rural. Renting a farm house on the Mohawk River, the family had access to the river. One of the author's chores was to feed the worm farm with used coffee grounds. Rowing out to an island one day, proved to be a disaster when the author got back after dark. Let's just say he did not do that again!

After living in Raleigh, North Carolina, and Tuscaloosa, Alabama, the family moved to Alexandria, Virginia, and the author entered George Washington High School (now a middle school). Running in cross country and track provided some valuable lessons in life. Coach "Fitz" Fitzgibbons would get teams to school early to watch films of races in the Olympics, and he would stress the styles of running. He set the tone for the teams when he said, "Even if the referees don't see you cheating by elbowing or tripping, if I see you, you are off the team."

The author attended Virginia Military Institute and graduated from Washington and Lee University, both of which are in Lexington, Virginia. In between his junior and senior years in the university, the author served as a student minister at Second Presbyterian Church in Petersburg, Virginia. There he met and courted Virginia Crowder, and they were married the following summer. He was in the U.S. Army for two years at Fort Knox, Kentucky. After graduating from seminary in Austin, Texas, the Williams (Art, Ginny and sons, Harlan and Don) went to serve a two-church field in Arkansas. Then the Williams moved to serve a church in the Shenandoah Valley of Virginia. After a year in graduate study at Pittsburgh Theological Seminary, the Williams went to serve another church in the Shenandoah Valley, and daughter Jean was with them. He received the degree of Doctor of Theology from Johannes Gutenberg University, Mainz, Germany. They moved to the coast of North Carolina, then to West Virginia, and finally back to Virginia, where the author retired. They have three children and five grandchildren.

Since retiring in 1994, the author has served part-time as pastor of small churches in Virginia. His other activities have included amateur radio, fishing and boating (taking boating classes up through celestial navigation), reading, writing and gardening.