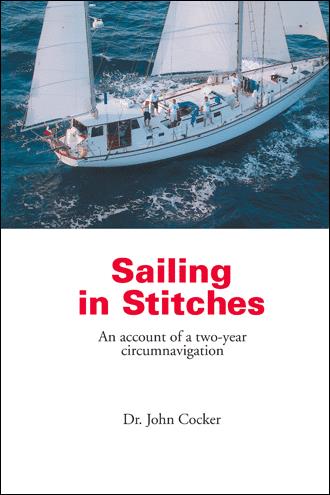 Sailing in Stitches relates the story of a circumnavigation in a 74 foot Yawl. Dr. John Cocker, a retired Family Physician and Publisher of STITCHES, the Journal of Medical Humour, decided at age 67 that he still had time for one more adventure. The book relates the planning and purchase of the vessel and then the adventures that happened along the way.

A motley crew was assembeld and left Fort Lauderdale in November, 2000. Dr. Cocker, with 20,000 miles of blue water sailing experience, was the only one on board who had sailed out of sight of land before. Heading down the Caribbean to Trinidad and then the Panama Canal, Dr. Cocker relates stories of the sailing, along with anecdotes and incidents that occurred.

The vast space of the Pacific, the 3,000 mile leg to the Marquises, when no other boat was seen for three weeks, and the events that occurred on scattered Pacific Islands, together with some natural history, economics and gossip make fascinating reading.

From Australia, the voyage headed from Bali through the South China Seas, where they were boarded at night by pirates, then through 'Pirate Alley', the straights of Malacca and to Phucket. Next came the Indian Ocean, Red Sea, Mediterreanean, and home across the Atlantic.

Dr. Cocker came to Canada in 1960 to serve his compulsory military services in the Canadian Forces. He was stationed in Winnipeg and Germany and became a Flight Surgeon, before leaving the military for General Practice in 1968.

He ran a busy practice in Aurora where he and his wife, Monica, raised four children. He was active in Medical politics, and built a medical centre. He became the medical director of two cruise lines and arranged for physicians to be shipsÕ doctors in the Mediterranean and Caribbean.

In 1980, with two other couples, he chartered a sailboat in the British Virgin Islands, and found his next vocation. Returning to Canada, he sold his house and his practice, and with his wife, sailed for three years through the Caribbean, Atlantic, European canals and Mediterranean. This one-year voyage won the Cruising association award for 1982.

After three years living on board, her returned to Canada and became involved with several businesses, including founding and running some walk in clinics, managing clinics for others, arranging practice management seminars, serving as medical director for MDS laboratories, establishing a telephone information service, and then founded STITCHES, The Journal of medical Humour. After a shaky start, STITCHES became the best-read medical journal in Canada and was published in Australia, South Africa, the UK, the USA, and Belgium.

Through the magazine he started the Stitches Explorers Club, which arranged conferences and holidays for physicians. Over the next twelve years, he led groups to Costa Rica, China, India, Antarctica, the Bahamas, Mexico, Singapore, Galapagos, Ecuador, and Peru and up the Amazon River.

Another major hobby was aviation; Dr. Cocker built three aircraft, the latest a high performance, all-aluminum RV6 that he flew around North America. He reconstructed a rare aircraft found crashed in the Arctic, which is now in an Aviation museum.

At the age of 67, he decided there was time for one more adventure and, to fulfill a long time dream, he started to plan a circumnavigation.

Sailing in Stitches is the book of this adventure.