by William B. Evans 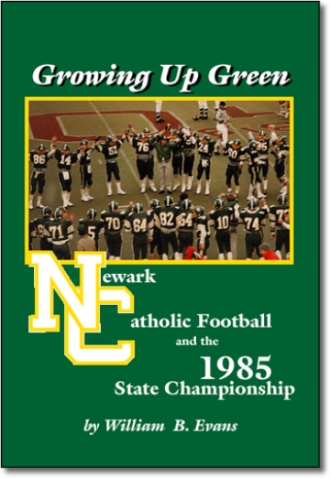 In 1985, the Newark Catholic High School football team finished with a perfect 14-0 record and won its fourth state playoff championship. The championship was also the second in the incredible string of four-in-a-row that occurred in the mid-1980's. The 1985 season was an amazing and unexpected feat when one considers that 20 starters from the 1984 championship team were lost to graduation. The year that brought the biggest rebuilding job ever turned out to be one of the greatest.

Growing Up Green is a detailed journey of the 1985 football team from day one of summer conditioning to the post-season awards banquet. Each opposing team is discussed in detail. Play-by-play is provided for all games including the Division V semifinal thriller against Mogadore and the hard-hitting title game against Delphos Jefferson. Get a fascinating inside look at the legendary Newark Catholic football program. Experience the heartbreaks and celebrations of a group of average kids as they struggle through an incredible season and fulfill a dream. A truly inspiring story for any athlete!

"Outstanding! I was captivated with each chapter and lost a lot of sleep reading late into the night."
-Joe Bell
New Albany, Oh

"I've never read a book that was so graphic with it's descriptions of each football play. It should certainly be a help to those who may not understand the sport of football."
-Frances Keck
Newark, Oh

"Inspirational. I felt like I was there watching the games and it made me want to stand up and cheer for the team."
-Donna Fleig
Leetsdale, PA

"The book does an excellent job of capturing Coach Graham's language and tone. I couldn't put it down and was often up reading until 2 a.m."
-Tim McKenna
Newark, Ohio

"Growing Up Green is a very pleasurable trip through Americana. The game to game replay is very detailed and the insights into the coaches and players is superb. It's football's answer to "Hoosiers!"
-Robert Greismer
Concord, Ohio

"The book was fantastic! I was laughing uncontrollably and my wife was wondering what was wrong with me."
-Albert Ghiloni
Newark, Ohio

"This is a must read for all fans of the old Licking County League. It brought back many great memories. Bill shows his great love for Newark Catholic and Newark Catholic football."
-Wes Poth
Assistant Varsity Football Coach,
Newark Catholic High School

William B. Evans is a 1986 graduate of Newark Catholic High School and was the defensive captain on Newark Catholic's 1985 State Championship football team. After serving four years in the U.S. Navy, he received a B.S. degree in Agriculture from The Ohio State University in 1995 and was an assistant varsity football coach at Newark Catholic that same year. His varied interests include composing and recording jazz/rock/fusion music, antique tractor restoration, model building, military history, jogging and, of course, following Newark Catholic football with savage devotion. William is employed by Licking County government and lives in Newark with his wife Jo-Ella.