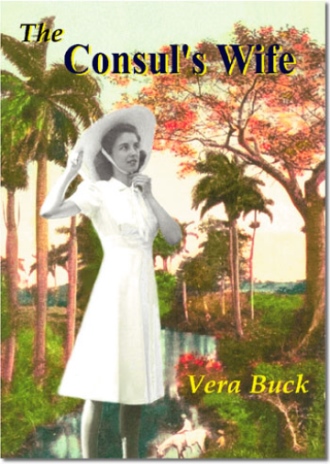 These are the true-life adventures and experiences of Joseph and Vera Buck who lived and worked in Cuba from 1917 through 1922. Joseph F. Buck, my grandfather, was appointed to a Consular position in Cuba, March of 1917, after having served as the U.S. Consul to Bremerhaven, Germany for five years.

This story begins as his pretty, young bride of three months, Vera Elizabeth Buck, my grandmother, joins him in Antilla, Cuba, January of 1919. They kept an excellent journal of all their experiences while they were in Cuba, and, at some point, Vera, I am sure with Josephs help, began converting their records into an historical narrative for posterity. She turned a rough, unfinished draft of her work over to the University of Michigan, Bentley Library, sometime in the 1960s. In a brilliant, far-sighted move, my grandmother stipulated that the copyrights remain in the family in regards to everything she donated to this library. I am her only grandchild and am therefore able to bring these valuable, historic accounts to light for the first time.

Meanwhile, my grandfather, Joseph F. Buck, had died of tuberculosis, September 14th, 1942, three years before I was born. My mother died six months after I was born and my grandmother, the author of this book, passed away in 1971 without ever telling me anything about it at all. The reason for this miscommunication was that I was raised 800 miles away from my grandmother and, unfortunately, not able to get to know her until she was in her seventies. I stumbled upon the rough draft of this book purely by the Grace of God while I was doing research on Joseph F. Buck, my grandfather, for a future book of his WWI experiences. All the places, dates, events, presidents, buildings, wildlife, boats, railroads, etc., have been researched and verified to the best of my ability and footnoted accordingly. The tales of Nico and Giva are both based upon factual history as supported by Joseph Bucks filed reports with the State Department, now on record in the National Archives, College Park, Maryland. Our family project that was started by my grandparents eighty five years ago (this being the year 2002) has now been completed! This has truly been a labor of love and I will advise anyone who is contemplating doing something like this to go ahead and give it a try, even though it can be pretty tough going at times. To complete a family project for your loved ones who died before they were able to finish it, has got to be one of the most rewarding things in life any one of us could ever hope to accomplish. Acknowledgments and gratitude must also be expressed to the White Pine Village, Ludington, Michigan for preserving my grandparents records documents and articles for all these years that my grandparents had donated to the Mason County Historical Society, and for all their kind, invaluable assistance and support.

You will notice throughout the book that Joseph refers to Vera as Julie. Why? Because my grandparents were both very romantic, so during their long engagement necessitated by WWI, they had to make do with a whole lot of letter writing back and forth across the Atlantic Ocean. They referred to each other as Romie and Julie (Romeo and Juliet) to help keep romance alive throughout this long ordeal. My grandfather cared so deeply for my grandmother that the pet name, Julie, stuck even after they were married in 1918. Vera certainly didnt mind as she felt the same way about him and their house was a house of love, indeed! I plan on publishing a series of some of those letters at a later date along with my grandfathers experiences from WWI as they are not only romantic masterpieces but quite historically relevant as well.

Christopher Edwards edited, researched, compiled and rewrote this memoir of his grandmother. He currently lives in Virginia.