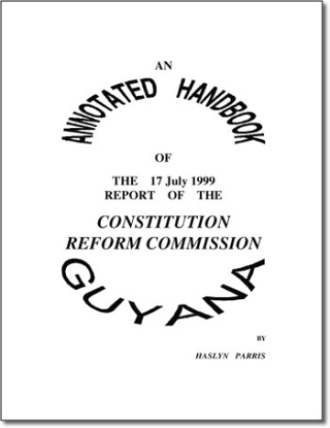 This Handbook is intended to facilitate the informed involvement of ordinary Guyanese citizens, and all others who may be interested, in the evolutionary process that appears to be leading in the direction of 'inclusive governance' for Guyana.

The fact is that too many opinion-formers have been unable to acquire copies of the Constitution Reform Commission's Report of July 17, 1999, and have therefore never read it; much less studied it. Nevertheless, the compelling nature of a complex evolutionary process has, however, not allowed that lack of information to impose silence on what the late former President, Hugh Desmond Hoyte, has suggested "appears to be an idea whose time has come." The meme variously and imprecisely called "power-sharing", "shared governance", or "inclusive governance" is spreading. And the temperature of the debate is rising rapidly!

As the Secretary to the now defunct Constitution Reform Commission, one of my reactions to these circumstances has been to provide this annotated version of the Commission's hard-to-get Report. Hopefully, this will turn out to be a small but important contribution to making the debate more informed; to attenuating the effects of "spin doctoring"; to thwarting attempts by any political party to claim unique paternity of consensually agreed recommendations; and to causing a more effective exploration of the ideas associated with adjusting Guyana's system of governance. If the book succeeds even minimally in achieving these objectives, I would deem the effort to have been worthwhile.

The Handbook contains, not only the Report with relevant Appendices, but also the unedited presentations to the Commission of some main stakeholders, viz.: the PPP/C; the PNC; the PSC, and the TUC. It also contains pen pictures of the Commissioners; and an account of where Guyana stood with regards to actual implementation of the Report's recommendations as at the end of October, 2002 - more than three years after the National Assembly's unanimous acceptance and endorsement of the report.

Early in the 1970s he became a member of the Central Executive of the then ruling People's National Congress, and continued to formally be a member of that Party and its Central Executive until 1992. The more than a quarter of a century of intimate exposure to academic, public sector and private sector business activities (including being on Boards of several companies), and politics, has provided interesting insights into the economic development process, both nationally and internationally (all gained at ringside or in the ring so to speak).

On 1 May, 1991, Mr Parris demitted office as Deputy Prime Minister, at the age of 50 years and having been the recipient of several academic and other awards, the most prestigious being the national award, Cacique Crown of Honour (C.C.H.) in 1980. He opted for a private life in the private sector as an author and a consultant.

More recently, Mr Parris has been involved in: the negotiations leading to the Herdmanston Accord (17 Jan 1998); the Constitution Reform Commission of which he was Secretary (1999); the Oversight Committee on Constitutional Reform (1999 / 2000) as Coordinator; and the Guyana Elections Commission (2001) as a Commissioner - a position he currently holds.

He has written six books since 1991 - Bunaro (a set of essays on economic development relevant to Guyana); two volumes of thought provoking essays entitled "some (and then some more) of my favourite Heresies"; two volumes of short stories entitled "Ribald tales of Guyana"; and "The Constitution of Guyana - What will it Look Like????". He is in the process of publishing a series of heretical essays on Guyana entitled "Heretical Musings".