The Constitution of Guyana 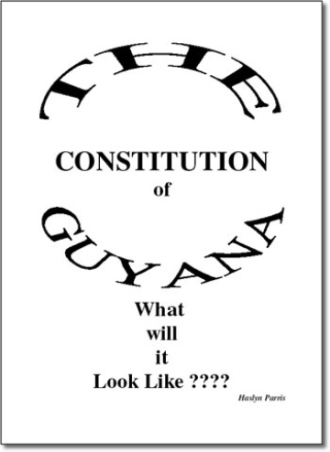 Constitution reform is currently a topic being discussed with great vibrancy in Guyana today. It is also attracting the attention of a number of foreign financial and diplomatic institutions, if only because of its pivotal nature in the matter of 'Governance' and its relationship with economic and social development. These discussions and interests are however inhibited by the absence of easily accessible information, in a single coherent document, that purports to show what the Constitution of Guyana would look like if the reforms stated in the report of the Constitution Reform Commission (July 17, 1999) were all to be implemented.

This book, entitled "The Constitution of Guyana What will it Look Like ????" , attempts to fill that information void, by pulling together all the actual and proposed amendments deriving from the Constitution Reform Commission's report - all of that report's recommendations having been approved by Guyana's National Assembly. The book therefore provides a convenient basis for evaluating how adequately the proposed new paradigms of governance conceptually conform with the desideratum of "inclusive governance" in a milieu of democracy.

The author, Haslyn Parris, enjoyed the unique privilege of having been the Secretary of the Constitution Reform Commission; and subsequently the Coordinator of the Oversight Committee which was mandated to translate the reforms into legislative amendments to the Constitution. In this latter capacity he worked intimately with the legal draftspersons who actually drafted the amendments for presentation to Guyana's National Assembly, and with the two main political parties in Guyana. All the amendments were unanimously approved by the National Assembly.

The amendments to the Constitution are quite far reaching; and not a little interest is being generated in how the gap between enabling and mandatory legislation on the one hand, and actual implementation on the other is in fact being bridged - including one set of amendments on fundamental rights that were unanimously agreed to by the National Assembly but for which the President withheld his assent!

For all interested in the matter of Governance in Guyana, this book should be a required reference. An equally important reference work by Haslyn Parris - An Annotated Handbook of the Constitution Reform Commission Report - is currently in the process of publication.

Early in the 1970s he became a member of the Central Executive of the then ruling People's National Congress, and continued to formally be a member of that Party and its Central Executive until 1992. The more than a quarter of a century of intimate exposure to academic, public sector and private sector business activities (including being on Boards of several companies), and politics, has provided interesting insights into the economic development process, both nationally and internationally (all gained at ringside or in the ring so to speak).

On 1 May, 1991, Mr Parris demitted office as Deputy Prime Minister, at the age of 50 years and having been the recipient of several academic and other awards, the most prestigious being the national award, Cacique Crown of Honour (C.C.H.) in 1980. He opted for a private life in the private sector as an author and a consultant.

More recently, Mr Parris has been involved in: the negotiations leading to the Herdmanston Accord (17 Jan 1998); the Constitution Reform Commission of which he was Secretary (1999); the Oversight Committee on Constitutional Reform (1999 / 2000) as Coordinator; and the Guyana Elections Commission (2001) as a Commissioner - a position he currently holds.

He has written five books since 1991 - Bunaro (a set of essays on economic development relevant to Guyana); two volumes of thought provoking essays entitled "some (and then some more) of my favourite Heresies"; and two volumes of short stories entitled "Ribald tales of Guyana". He is in the process of publishing an Annotated Handbook on the Constitution Reform Commission Report.