the future is an anagram

by Raceching Cover design or artwork by Hazel Lincoln 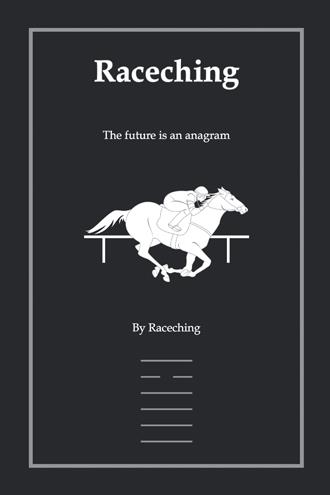 Raceching is one of the most innovative and exciting books ever written. Based on the Confucian classic I Ching, it is written in a unique earthy style that is easy to understand and will appeal to all age groups. The author whose name is the same as the book adds his own ground breaking techniques when it comes to showing people how to make everyday predictions by using the Chinese oracle.

Race has included new information in regard to the lines of the I Ching, by describing a series of actions which he calls single line tenses. These are a set of drawings, showing in graphic detail the actions of each and every line of the sixty-four hexagrams, when they move and change into another (moving line).

Raceching shows a new way to form the hexagrams by a simple process of word and letter counting, this is not only easy to operate, but deadly accurate when making predictions. There is also a chapter dedicated to a technique called psychic anagramming, where readers learn a new way to predict the future by looking for hidden words in a person's name.

However, the most exciting feature about Raceching, is that it centres on horse racing and betting. Race shows his readers how to turn their daily morning newspaper racing page into an exciting new word/anagram game that can pick winners and make profit. I Ching hexagrams are constructed from the name/ time of a horse race by a simple process of word and letter counting. We look for a word or words in the name of the horse - matching it with the Raceching book's blueprint of the winner. There are five logical rules race has invented to make this one of the most exciting word games since the birth of the crossword! Raceching, cans something that is similar to what housewives do on big race days, i.e. looking for personalised word names on a race card that means something to them and their intuition, such as the name of a pet or relative's nickname. It all sounds crazy to the form study boys who have backed the favourite until the thing wins at 33/1- and nobody laughs anymore.

Raceching will appeal to not only followers of I Ching, but also anyone who loves horse racing and gaming in general. It will also appeal to people who love making words, anagrams and letter puzzles. It is a dual purpose I Ching book in one.

Raceching the author is an Englishman with an outstanding knowledge of I Ching. He has based his book around the UK racing scene, but it is easily adapted to fit world markets. This book is the first of its kind, entirely innovative and new in relation to other I Ching publications. When Race says the future is an anagram.... he means it!
Raceching.

Raceching is a dedicated person; he has lived alone for many years and has a wealth of knowledge far beyond what is considered normal in relation to I Ching. The Raceching book was developed and written during the last twenty-five years, and the author is especially proud that his spiritual/psychic development allowed it to happen.

The author is grammar school educated, but by his own admission finds it hard to relate any of his formal qualifications to the study he undertakes on a daily basis. You do or you don't do! You can or cannot! This is his philosophy and he does his best to abide by it. Race follows the way of Tao and is true to himself in relation to this, he is not interested in materialism, only knowledge, knowledge is power, and true power equips itself to serve the best interests of both men and women alike.

Race has never written a full-length book up until now and Raceching is his first literary offering. He has in the past written several short stories and a host of local articles, but all pales into insignificance. Raceching the book developed over twenty five years, a product of the author's deep penetrative thinking and a love of horse racing, it is an unusual book written by an unusual person, but it contains significance for the future.
Race!