Observations of a Ski Trooper and Journalist 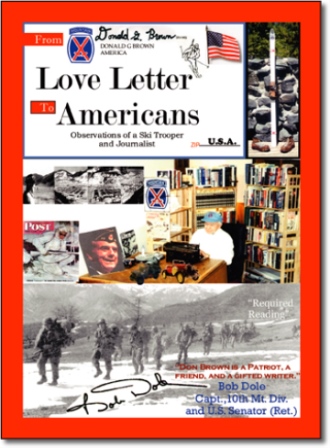 "Donald Brown has written an outstanding book that will quickly become required reading for anyone interested in World War II, or the 10th Mountain Division. While serving as a "Thank You" to the many Americans who helped Don along the way, it also relates many wonderful and moving human interest stories about the 10th Mountain Division - a fraternity I know a little something about.

Because Don is also an accomplished journalist, he has seamlessly woven his words, memories and deeds in such a way as to create a living and breathing memorial to all he served with, and all who are fortunate enough to read this work.

Donald Brown is a patriot, a friend, and a gifted writer, and I highly recommend this tribute to a simpler time."

By age 19 drove his Model A Ford, hitchhiked and walked through the contiguous 48 states in preparation for a professional career in journalism, inspired by correspondent Ernie Pyle's newspaper travel stories.

His experiences with the legendary 10th Mtn. Div. which spearheaded the final fighting of the Italian Campaign impressed and inspired him for life. Therefore for the past 54 years he has kept in close contact with hundreds of 10th men and studied closely the entire history of this one-of-a-kind organization.

After WWII he was appointed a major in the ORNGR by then-governor Tom McCrall.

Completed college under the GI Bill.

Marva: Retired, public school teacher for 40 years and a patient, long-enduring participant in the 10th Mtn. Div. ventures, get-togethers and discussions with 10th veterans and wives.

Brown is a retired journalist after 45 years with New England and West Coast newspapers, on-air radio and television (ABC and NBC affiliates), and magazines. He owned and published a newsletter for 20 years from Oregon.

Presently researching, verifying and drafting a proposed book of his memoirs planned as a thank you letter to Americans for providing his education, nurturing him through the Great Depression, helping him to see America and survive that terrible war, and for building faith in himself, his fellow Americans, and the greatest country God ever created. He knows what's right with America.