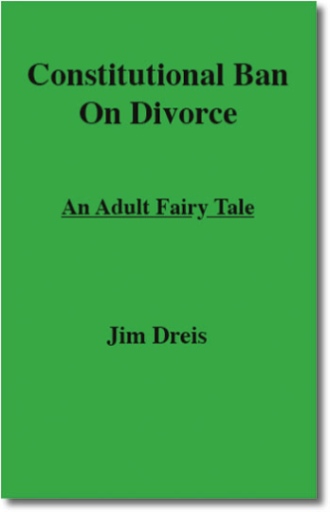 Once Upon a Time:

The conservative, religious right view the Constitutional Ban on Divorce as a liberal plot to undermine the institution of marriage, an institution they consider the cornerstone of their philosophy. Threatened by this, they call on conservative talk-show hosts, members of Congress, and even the U. S. President to rally against the idea.

Posh--a popular, conservative talk-show host--wastes no time identifying the "enemy" and their motive.

Winnie and Hennie Hanaford, blind sided by the Constitutional Ban on Divorce, spear-head the conservative drive to ban same-sex marriages only to have Winnie drop out after "unexpected" difficulties.

Meanwhile, Hilda "Boom Boom" Broom Becker, a take-charge gal, becomes the President's personal assistant. She secretly fears a ban on divorce could harm her chances to land a husband.

And the President, aligned with the conservative right, views the bans on same-sex marriage and divorce as necessary evils. But his goal is to go down in history as the "War President." Unfortunately, his plans go awry when the Secretary of Treasury plots to outsource government jobs...

Finally, spearheading the Constitutional Ban on Divorce is a shadowy cabal of four, known as the "Little Rascals." Relatives of the author of the Ban (and the author of other ideas, some of them quite controversial), they take the initiative to make the Ban happen.

Raucous, hilarious, mind numbing... the story ends as most fairy tales do:

And everyone lived happily ever after...