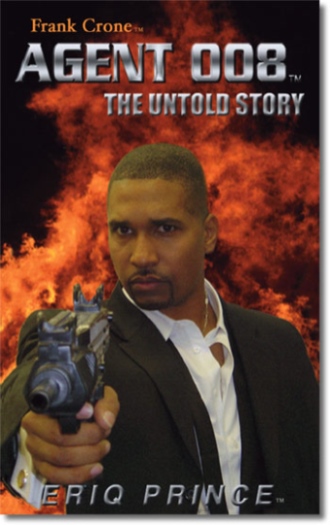 Agent 008™: The Untold Story is a riveting spy thriller which is based on actual events. Agent 008™: The Untold Story revolves around the life of an African American Secret Service agent who finds his self caught in a web of espionage and terrorism. This sexy, action spy thriller is sure to grab your attention quick! As it unfolds with page after page, heart pounding, nonstop action, steamy romance, and clever plots.

Inspired by actual events from around the world, beginning with the city that never sleeps - New York, to the mysterious Tokyo Japan, and Korea just to name a few. Actor, writer Eriq F. Prince combined his life as a former police officer from Chicago, where he worked with special agents from INS, to the FBI, as well as the Secret Service creating this spellbinding thriller! This hot-steamy and suspenseful spy thriller takes the reader into the adventures life of FBI agent Frank Crone, who has been connected to his father, a missing secret service agent; who without a top-secret operation of the American Secret Service will be aborted.

Frank Crone, Jr. has no choice but to comply with his new bosses of the Secret Service who are running out of time, and need him to stop a major catastrophe from happening. Frank Crone - Agent "008" is sent to find and bring to justice, a ruthless Japanese killer: Yoshomoto-a suspect with a plot to destroy the lives of thousands of Americans using a deadly, sophisticated invention. Frank Crone is America's last chance! Will he come up short, or will he pull off the unthinkable... find out in this awesome spy thriller Agent 008™: The Untold Story.

Eriq Franklin Prince is a man in the pursuit of excellence by way of the Almighty creator. Whom Eriq believes deep in his heart, is the only true focus in life, and that to obtain an excellent way of living, is to embrace the human race with love, kindness and unwavering human dignity. At the same time, being strong, humble, persistent, and courageous in the pursuit of his goals and dreams. Eriq enjoys living life to the fullest with his beautiful wife Tammie of eleven years, and his two daughters: Chacadyah and Chaniynah in sunny southern California.