A Poppy for his Grave 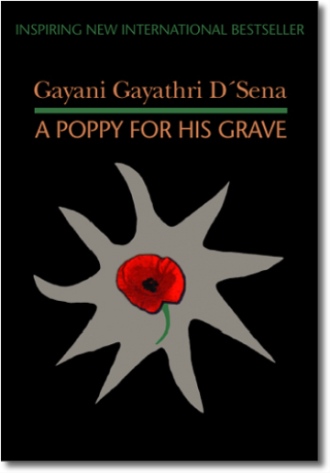 Four generations of Royal Air Force officers tell a story. In the modern era the great-grandfather is reincarnated and travels to the mightly Himalayas in search of his predecessor's remains. The third expedition of the fatal air craft, while joined by his financee and a team of R.A.F officers being successful, whereas the previous two conducted by his family due to limited facilities, and the uncertainty of the exact location had failed. It is ultimately revealed by psychic sequences conducted by a modern lady guru and her handsome spouse which enable the officer to control and project his psychic visions and see himself as a fighter pilot during the second World War. Having easy access to the crash sight in the upper part of the Himalayas they hire helicopters and camp in the snowy mountains with Tibet on one side and eastern Kashmir below (Ladakh area). Tracking the officers are a couple of crooks after the antique gold and emerald necklace and other jewels belonging to the late air commodore's anglo-asian wife which were supposed to have been aboard the wreckage. Disguising themselves as monks from the adjoining Gompa (monastary) they visit the team in the middle of the night while the cremation of the old war hero is taking place, due to the fast decompostion of the bodies 60 years after they had been excavated from icy glaciers. Ash is collected in a couple of silver urns for a proper memorial service and entombing in time for the next poppy rememberance day celebrations in England.

The young couple and team celebrates the dawn of the new millennium on the beach at Mt. Lavinia. They watch the world go by in celebration covered by SKY from the far eastern Kiribathie islands to ulitmately arrive 24 hours later in Hawaii. While the United Nations celebrate, the team's conversations vary from Egyptian, Roman and Greek mythology to UFOs and dimensional beings who freely roam the plantations in Nuwara Eliya (Ceylon/Sri Lanka) better known as little England. These ghost beings are mentioned as very attached souls to their environment. They remain so until they exhaust their own cravings an debts re-evolved in to another cycle of birth in different forms according to the indiviudal's good and bad deeds, causes and their effects. More adventures take place in the epilogue with descriptions of food, music, clothing, places, environment, rituals, festivals and archeological sites which are buried with more ancient treasure.

In the third chapter the R.A.F. officers' eastern born fiancee mentions that everything in this universe is destructionable, even the sound barrier breaking jet, Concord. By the eighth chapter or so, the Concord has actually crashed in France! The team are instructed to send loving thought-waves to all the departed souls helping those left behind to realize that death at one time or the other, in different circumstances is not the actual end. The gurus teach them multi-religious harmony and with a powerful thought wave that anyone can get re-connected/reborn into their own families or friends (this theory is introduced to the reader along with a misunderstood knowledge of some holy books being correctly enlightened in the process, helping the present war on terror times. At the end the young officer and his fiancee are married at the all Saints cathedral, starting a new life together. The novel ends in thanksgiving to all the brave men and women who had sacrificed themselves during the Second World War and thereafter, in the Indian subcontinent. Very specially the Royal Air Force on completely training and establishing the Indian and Sri Lankan Air Force counting their own golden jubilees during the new millenium. Spiritual intrigue, universal mysteriousness, love and laughter, and a happy ending is disclosed in this novel.

My life has been a portion of Thrills & Spills still I'm a Dreamer with an over dose of ESP and Visions, which made me stronger than ever, thereby making me Get-Up and do what I was and still is good at doing - writing! Inspiring others with Fiction based on real life Facts! Of course, I've had the honour of been trained by some of the worlds Best Teachers, who were and some are still well known Gurus. A few lived at the foot hills of the Himalayas while some others were at my home base. I Loved to create things and Fantasized Myths and Legends into real breathing and living creatures! What I didn't write, I Illustrated eventually transforming them into short exemplary stories for Children in my own country. My debut International Adult's novel "A Poppy For His Grave " is a total dedication to the Soldier and All other beings everywhere, even though the background and story unfolds around the Airforce.

I guess I was influenced by my father, who is a professional and knew everything about Flying and being an Air-Traffic Controller, while my Mother is a dedicated house-wife who happens to be an active committee member of The Sri lankan House-Wives' association since its Inception over four decades ago. I happen to be the middle girl in a family of five siblings. My elder Sister & her family, lives in the U.K. She's into Foreign services. The older of my two brothers, is a Senior Officer In an International Air Line & The younger Is a Showrooms Manager, of a High Tech Japanese Electronics Company based In Colombo. My other Sister chucked up her Diamond cutting career to become a full time house-wife.

I was Covent educated throughout High School and College, thereafter I trained as a Directress of A.M.I. (Associated Montessori International) under the tutelege of Dr. Ms. Pillai (who was originally trained by Dr. Maria Montessori herself) and by the Chief Directress of The Marian Method Of Education In Sri Lanka. On following specialized courses In Psychology In London I was given a position to Lecture as an A.M.I. Directress at a couple of Houses of Children In Solon and Aurora, Ohio, U.S.A. respectively. Once again, my calling was at home base, where I joined our National Carrier for a period of time having under gone full training as an Inflight Stewardess not forgetting my brief span as an English T.V. News Broadcaster to eventually branch off as a Free Lance Features writer to various Journals and Newspapers enabling me to travel more around the world, being in tune, with different countries, their Cultures & Rituals, having met different crowds of people en-route, having a multitude of attitudes and behaviour patterns, perhaps only to collect, and pre-plan my data-base in putting together Adult's Novels, of which, at that time, I hadn't given much thought to at all! This almost always got one or the other of my long suffering lecturers to encourage me, admonish me, and sometimes to even bully me, on and off, time after time, to start writing my accumulated knowledge on paper! Having rather a mischievous disposition I used to happily annoy them back, by laughing it off, as an Impossibility to ultimately, Do exactly That, which they had all asked of me, in The new Millennium!

Having acquired a Multi-religious knowledge and been a Psychic Astrologer, I have directed many persons to a better knowledge on the Whys, Whats and How-so theories, very specially during these "War On Terror Times," regardless of any particular religious beliefs, but only Inspiring simple and Loving thought projection creating one's own healthy and happy outlook in one's own life style, not forgetting The Total Romantic background which just so happens to be the Energy of the Life-giving Force of Stress-free happiness, as In all things in life and thereafter! I Live with Family and Friends in the Western Provincial Coastal City of Mt. Lavinia, a subarb of the Commercial City of Colombo, in my Tropical Island Country, situated in the Indian Ocean which was originally called "Thambapani" - The Land of The Golden soil - by The Lion People who lived here for over 2,544 years. Thereafter to be recognised by the Silk-Route Traveller and The Adventuring Sea-Farers as "Serendib" -The Land of Gems - only to be re-named "Ceylon" - a former colony of The British Empire, where the world's very best Tea Is still produced In "This Land Like No Other" to be eventually known today as The Republic of Sri Lanka. Thereby I take great pleasure In Thanking all those, who have browsed through this web-page In our national language, which gives an age old Blessing for a very long life, "Ayubowan"! May All Beings be Well and Happy!