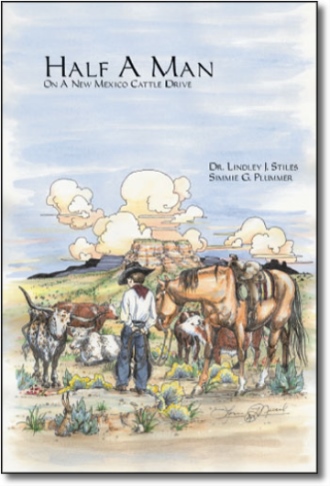 Half A Man is a true story about 12 year-old Lindley's struggles to be accepted as a real man. It deals with the Federal Government's Foreclosure on unpaid loans made to New Mexico cattle ranchers to increase their meat production for soldiers in World War I. When the war ended, prices dropped and ranchers in the remote north western part of new Mexico who had no market for their beef, defaulted on their loans. David Stiles, Lindley's father, was persuaded to undertake the task of gathering steers to pay the government debts and drive them to the nearest railhead, Grants, New Mexico. Dave Stiles, veteran of many cattle drives in his youth, stipulated one request if he was to undertake the unpleasant job of foreclosing on his neighbor's cattle, namely, that his 12 year old son would be hired on for the effort.

Buford Threlkedld, the Washington agent in charge reluctantly agreed that the boy could be put on the payroll, but shown as half a man, at half pay.

Called, "kid" and "the boss's baby" and other belittlling names by Firpo, one of the cowboys on the crew, and assigned by his father, the boss, to such kid jobs" as tending the fire for the branding, helping the cook, getting up early to drive in the remuda of mounts for the crew, and driving the tail-ender drags of the herd, the boy sought ways to prove he was a real hand. His success was like a roller-coaster-like a boy one day; like a man on another. Down day came with his going to sleep and losing steers who hid in the brush and getting fired by the by the boss, being assigned to watch the horses while others drove the steers across the Chaco, doing a "girl's work" when helping the cook; openly crying when Tex's beautiful horse, Copper was lost to the quicksands, and getting tripped with his food plate by his enemy, Firpo, as well as his failure to eat rattlesnake meat, considered a test for being a cowboy. Highlights of his success were: being the boss of two other grown cowboys sent to gather the Macklin steers and exposing an attempt to hide animals to keep them from being taken, doing well on the old bay mare while crossing the Bisti, being asked by the boss to introduce the beautiful Frances to all the other hands, and finally being able to rescue Firpo when his hose fell with him during the stampede.

Readers of Western Books will find action on every page. The descriptions of the round-up, and cattle drive will be applauded by the experts and enlightening to all who are unfamiliar with the details of organizing and executing a drive of 1500 steers to market. The description of how a small town, Grants, welcomed the coming of the cattle as a time to celebrate. "Half A Man is a jewel that should not be missed, I simply couldn't put it down", wrote the popular critic, Marc Simmons of the first printing.

Dr. Lindley Stiles, a world class poet, author and educator, was born on a cattle ranch near where Tatum, New Mexico now stands. His distinguished professional career was anchored in his boyhood experiences on his father's cattle ranches-on the Caprock, near Grants, at Pueblo Bonito, and on the West Gallegos. He graduated from the Farmington, NM High School which elected him as one of the first members of its Academic Hall of Fame. After completing his formal education at Fort Lewis College and the University of Colorado, Dr. Stiles served as Dean of Education at the University of Virginia, and the Interdisciplinary Studies at Northwestern University.

Dr. Stiles has recorded his memories in I Never Rode Alone; My Boyhood on A New Mexico Cattle Ranch. Cowboy in the Classroom, his professional autobiography, was written to accompany the Stiles Career Shelf in the Archives of the Deering Library of Northwestern University. Class-room Cowboy: Out to Pasture, is an addendum which deals with his on-going career activities. All contain various episodes from his cattle ranching experiences which sparked his pioneering spirit as a professional educator and writer. His creation of the social wisdom, The Best Should Teach, led to his being named a "Living Legend" by the International Biographical Centre, in Cambridge, England.