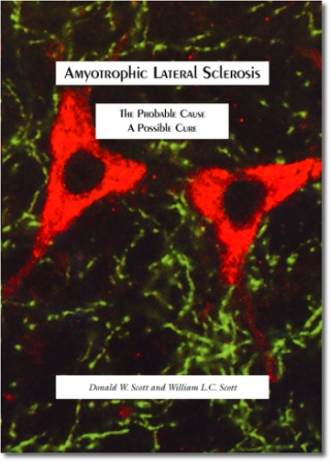 On September 7,1993 the United States Government was granted a Patent #5,242,820 for a Pathogenic Mycoplasma [Appendix One ]. On page 20 of their Patent the following patients were listed as being infected with the Mycoplasma fermentans: AIDS, Alzheimer's, Sarcoidosis, Lupus, chronic fatigue syn- drome and others [Appendix Two].

In their dramatic new research reported in this book the authors extend the above list by adding Amyotrophic Lateral Sclerosis. Supported by solid, re- producible scientific evidence, the Scott father and son team demonstrate that the pathogenic mycoplasma up-takes pre-formed cholesterol from the Glial cells which surround the degenerating motor-neurons of the ALS victim. The loss of this cholesterol prevents the motor neurons from replenishing and replacing damaged synapses. With the synapses not functioning, the messages from the cortex of the brain do not get through to the muscles and Lou Gehrig's Disease presents.

The Scotts also demonstrate that all the diseases listed in the U.S. Government Patent are indeed caused by a common factor: the Pathogenic Mycoplasma.

With the probable cause well-established,the Scotts conclude their study with a possible cure for all the neurosystemic degenerative diseases.

The 'mystery' diseases are not a mystery any more.

Donald W. Scott was born in Wiarton, Canada in 1924. He served in Canada's wartime navy and later graduated from the University of Toronto (BA), Guelph University (MSc) and Laurentian University (MA). He is the President of the Common Cause Medical Research Foundation and is an Adjunct Professor of the Institute for Molecular Medicine. He edits The Journal of Degenerative Diseases and able magazine. Mr.Scott married the late Edith Goody of Cobourg in 1946 and has eight children. He is presently married to Cecile Marie Courtemanche, and resides in Sudbury, Canada.