The Babarians of San Francisco - Poets From Hell 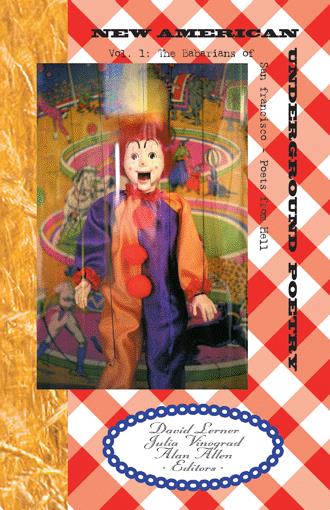 (2005) Cafe Babar (named after the storybook elephant) is a little Cafe on 22nd and Guerrero behind the Mission District in San Francisco. From there on the West Coast from the mid-late '80s up through about 1994, a unique group of poets gathered on Thursday nights for a feature, followed by an open mike.

The poets performing or reading their work there became known across the United States and in Central and Eastern Europe as some of the best poets in the U.S. They valued emotional honesty and their poems captured it. They found academic writing boring. Regarded the bohemian beatnik poets of North Beach as 'puffed-up', has-been, even geriatric.

The Babarian poets were broke. Won the west-coast slams but couldn't afford the tickets to go East to compete. Lived only to write, to perform, to read. Many were without jobs (with notable exceptions), or disabled, or addicted, or worked in the sex industry. Most struggled to pay the rent, or eat well, wore thriftshop clothes. IQ's were the highest, hearts the biggest, poems what mattered most. Was all about feeling in their voices, their words, their lines, their lives.

Co-editor Julia Vinograd: "Throughout the early-to-mid '80s the Spaghetti Factory was a central collecting spot for North Beach 'beat' poets. Then it closed. We bounced uneasily from one place to another: Banan Place, On Broadway; Peters' Pub, etc. We were glared at suspiciously by everyone from elderly dart players to rock bands who thought we had no business wasting their warm-up time. Gradually the people changed. The poetry changed - we definitely weren't 'beats'.

A genre of new, impatient Babarian voices emerged: personal, vivid, very much in the modern world from tv to mtv to the sex clubs - a voice influenced by the L.A. slums of Bukowski and the NY slums of Jim Carroll - but undeniably San Francisco, the San Francisco tourists never see."

Modern Maturity – “[Poets] meeting at Cafe Babar are the ‘Babarians’. [These] new San Francisco poets love to attack the established social order, [they] are the incursion of poetry into popular culture!”