The Life and Times of Dr. John Parmenas Eustace 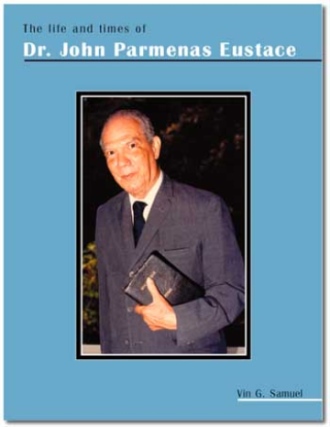 The life and Times of Dr. J. P. Eustace is an account of how a man with faith in God, a positive mental attitude, dedication to unselfish service, and a commitment to educate the poor, triumphed over colonialism and mainstream religious doctrine to become one of the greatest West Indians of the twentieth century. His life story embodies the history of St. Vincent and the Grenadines for almost all of the twentieth century. And, although his initiatives in education were made without regard for political influence or financial rewards, they are generally recognized as having significant impacts on societies in the Caribbean, North America, and Europe.

John Parmenas Eustace was born in Mayreau, St. Vincent, then a British colony in the West Indies, in 1905. He obtained an early education under a system that groomed him for life among the elites of British colonial society. With his family roots in the middle class elites, and also in the powerful European plantation-owners class (plantocracy), one would not have predicted that the young John Eustace would mature to be a revered name in the lives of the masses in his homeland, and a contributor to the struggle for political liberation in the Caribbean.

The author examined the life of Dr. J. P. Eustace within the context of Christianity and twentieth century history. Third World struggles against colonialism and imperialism, world wars, the communist-capitalist cold war, international banana war, Rastafarianism, West Indies Cricket, and Caribbean music (Calypso, Reggae, and Soca) illustrate the times in which Dr. Eustace lived, and the pages of the book. Consequently, this book will appeal to a wide readership, including Christians and non-Christians alike. Furthermore, it will be particularly useful to those interested in Third World political and economic development, and for developing individual plans to meet the challenges of modern life.

The lessons of the Life and Times of Dr. J. P. Eustace are many. But the greatest lesson of all is that we can make wise decisions based on unwavering belief and willingness to take positive actions for the glory of God. This lesson is timeless in appeal and if heeded will contribute to a full and useful life in this world.

The book is intended as an educational source for both children and adults. It will be particularly enlightening to those seeking to understand Caribbean history and its connections to international politics and colonialism, students of third world economics, investors, and others with interest in the Caribbean, particularly in St. Vincent and the Grenadines.

Vin G. Samuel is a native of Windward Lowmans, St. Vincent and the Grenadines. He received his early education at the Windward Lowmans Anglican School, and secondary education at the Emmanuel High School, Mesopotamia campus. After passing the University of Cambridge General Certificate of Education, Mr. Samuel worked as a teacher for one term at the Lowmans Anglican School, and then accepted a position at the Emmanuel High School where he taught English and History for one year, before immigrating to the United States Virgin Islands in 1972. Mr. Samuel has a long and much-valued relationship with his alma mater where he serves as a member of the International Board of Reference. It was at the Emmanuel High School that the Christian principles on which his life is based were nurtured, and his plans for the pursuit of higher education were developed. He is honored to write about the late Dr. John Parmenas Eustace - a great mentor, innovator, teacher, and Christian Crusader.