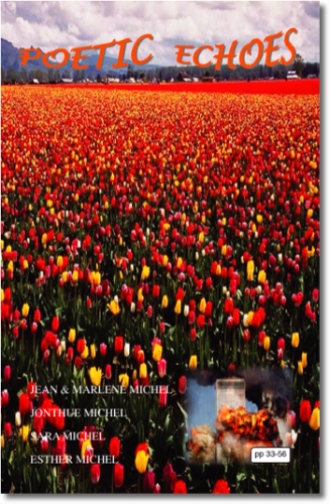 This theme is very important because in today's society love is largely misinterpreted and misunderstood.

POETIC ECHOES is different from any other poetry book you may have read, due to the fact that it was written by a five-member family, (mother, father, teenage son and two daughters) instead of one individual, and therefore it contains poems that adults, children and teenagers can relate to.

By reading the poems contained in POETIC ECHOES a taste for realistic modern day poetry will be aroused in you. You will come face to face with the fact that when unity exists in a family, there will be no room for boundaries. And you will no doubt want to start putting your inspirations on paper, so that you too can share something with your fellow men.

Your friends are special and deserve to receive a special poem, which expresses how grateful you are for their friendship, whether it is valentine or just whenever impressed to do so. At times you want to let your spouse know just how special he/she is and how blessed and complete their presence make you feel. You might have faced tragic moments in your life and need some words of encouragement. Most likely you are an admirer of nature and also of the God of nature. Whatever the situation there is a poem in POETIC ECHOES just for you.

Jean Michel: As a child I had a love for poetry, Especially after learning "La abeja y la mariposa" and hearing my sister reciting "Le cid" But that' s as far as I went in poetry. Being a singer and songwriter, a producer and sound engineer, and a MIDI specialist, poetry was the last thing I ever thought of until I met Marlene. Out of the blue one-day, as I checked out my e-mail and I came across a letter from Marlene, as I read on I realized that it was more than a letter, it was a poem. As I read through the lines my mind and heart was getting in a rich elevation of love. You will imagine how I felt, as you personally read the poem. It' s entitled "A melody of love". The poet in me, which was asleep for so many years was awaken by the loving elements of love in her poem, and my love for her also received a higher awakening that day. I found myself expressing myself in words that I never thought could come out of my heart. You will see for yourself as you will have a chance the read my answer to her poem "I see the melody".

From this day I realized, Poetry is a gift from God, designed to express the most unforeseen feelings, impressions and amazements of the heart, in a most exalted language. So I began to take some time from my busy schedule to find my poetic connection with everyone and everything the Lord created for our happiness, Especially the Lord Himself. In so doing I discovered the goodness of the Lord for you and me.

Marlene Michel: I live in New York with my husband, Jean Michel, and children Jonthue, Sara, Esther and Ruth. I wrote my first poem when I was fifteen years old; the title was The Silent observer. I was inspired by one of my high school classmates who even though he hardly spoke except when spoken to; he was among the smartest of the class. I learnt that the less talkative could accomplish a great deal. I have always enjoyed reading poetry especially short ones. My desire for writing poetry some how went to sleep for a while as I became satisfied with reading those of others. But was awakened four years ago, while I studied at Montemorelos University in Mexico. I took a class called composition in which each one was required to compose four poems. I grasped that opportunity with great enthusiasm and also courageously took the challenge of composing in Spanish, which I had started practicing since six months prior to that time.

I had more inspiration than anyone could imagine, it' s as though I had found God anew and my eyes were open more than before to the great miracles that he has been performing in my life on a daily basis. The first of the four poems was La fuente de mi existencia ("The source of my existence" ), which was really a tribute to God. God blessed me to compose all four poems and my teacher Ana Laura Morada and many others were very impressed. I give the credit to God. He is worthy of all praise and adoration.

I wrote a few more after that. But I really started writing when I met my husband, Jean Michel. I was still in school in Mexico, while he was living in New York. This distance gave us the opportunity to write letters to each other, poems would be included in these letters and somehow even when I thought I had just written a few lines that could have been much better, my husband would get really excited and say things like, you are a poet, how did you write this, I never heard one like this or I can' t wait to drink from your fountain of love (receive more poems). Well He just seemed to always find my poems as an inspiration so automatically I was inspired to keep on writing. When we got married we realized that everyone in the family likes to write and so we got the inspiration of composing this book as a family.

I want to use this opportunity to thank my Mother for all the sacrifice she made for me, in order for me to have an Education and true values in Life. Thank You Mom, May God bless you always.

Jonthue Michel: I live in New York. I enjoy exploring new soft wares, I like to meet new people and I love to baby-sit. I worked in a day care center while in mid-school. I also like training, for the future. I developed a passion for poetry after reading about Romeo & Juliet. The exalted language they expressed toward each other stirred my heart with love, and then I began to express my heart through poetry.

Sara Michel: I was born on August 9, 1990. My favorite foods are Chinese food, dumplings, Haitian patties, Jamaican and Mexican food. My hobbies are playing volleyball; soccer, baseball and I also enjoy writing.

Esther Michel: I find interest in the sports, Kickball, Baseball, Basketball, Double Dutch, and many more. My favorite types of food are Haitian Patties, Mangoes, Oranges, Strawberries, Hot Chips and hot food, Chinese Food, Italian Food, and many more! I was born in Brooklyn, New York, at Methodist Hospital, on October 23,1991. The Elementary School I went to was called John W. Kimball Learning Center, Public School 107 (Magnet School for Math, Science, and The Arts) the best school ever!

The first time I was interested in poetry was in the summer of 2001. I was in the living room using my best friend Argentina Monge' s Gel Pens and all of a sudden I was writing something down and I showed that thing to my dad (check out the poem " Families" ) and he said it happened to be a poem when he read it out loud my brother started to cry, we asked why, and the reason was because the part " The bond between a mother and a son is like raindrops on a rose" made him feel sad and lonely because we had no mother (our mother died when I was almost through 1 st grade). Then three year later the Lord blessed me with a new mom, Marlene. And on the first mother's day we shared, I wrote this:

"Ever since my mother died
I had a burden harder than you could ever see,
But ever since you came,
I lost all the pain,
my life was never the same ever since this gift
came.
HAPPY MOTHERS DAY!"

I wrote this at school and you won't believe how watery my teacher's eyes were. If you are reading this Ms. Ellen Rick or any other of mine teachers, I want you to know that I love you and thank you for all your help.

Please be aware of my book "Poetry From the Heart", and some of my CD'S (didn' t I mention that I want to be a professional singer!!!) anyway let me get back to what I was saying, that's how I became a poet!