Living In The New Age Again

A Journey Through The Corridors Of Time 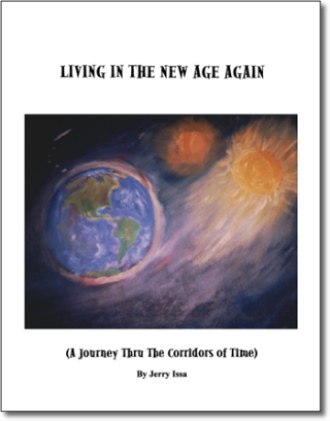 Metaphysics has been my profession for the past seventeen years. Prior to that, as I studied and learned, I witnessed others trying to fit new ideas into old concepts. Instead of seeing the New Age seekers come together with one mind, I began to see them being divided by their expanded philosophies, with intolerance building. This emotion, intolerance, is in my opinion one of the greatest hindrances to the evolvement of mankind.

I began to search for the threads of sameness, not diversity, to show that the various philosophies were not so different from one another. I found that most differences were semantics, the label or name we used. We adopted an iron-clad rule in my business establishment that philosophical thought, no matter how different it might appear, was to be honored as long as it harmed none. This has given all of us, workers and seekers, the opportunity to broaden our understanding.

Thru the years I realized that neither creationists nor evolutionists were wrong. It was only that we were not seeing the whole picture. This book attempts to show both views are correct; that reincarnation is a fact; that there is an ultimate state of non-physical being; that there is both a masculine and feminine energy guiding mankind; that physical man on Earth receives help from advanced as well as non-physical beings; and that all of this was known and recorded in ancient times in the days of Thoth. Further, that this knowledge is our heritage as well as our legacy; and that Cosmic Cycles of Time affect our knowledge and level of understanding concerning the true nature of man. It further attempts to bring together the New Age community by showing that we are on the same path, even if we don't think so at times.

My hope is that it will strike a note of truth in all who read it, especially general New Age, Christian, and those professing no particular philosophy but who have an interest in what life is all about.

I have spent my entire life searching for answers. At this point in space-time, most knowing seems to be coming from within. I have not attempted, nor do I have the ability, to supply empirical proof. Those who read this book will find their proofs, acceptance or denial within their own being based on where they are in their own personal evolution.

Christains who have expanded their belief system may find answers to some of their unaswered questions.

Those who float between Eastern and Western philosophies and have become confused might find some clarification.

Those locked into a narrow religious view, not accepting evolution nor reincarnation as a possibilty, will probably be disturbed by its implications.

Anthropologists and scientists will probably take issue with the family tree and theory that the whole human race was genetically engineered, all the way back to Homo Habilis.

Even though it refers to Astrology in a general way, and is not intended to be a dissertation on the subject, astrologers might find some interesting concepts on the cycles of time.

Ufologists searching for reasons behind the phenomenon will be able to obtain a broader view of the underlying purpose for these visitations.

We are all on a quest for truth. This book is the result of my own personal quest, and I am honored to share it with you.

Jerry Issa , the author, was born in 1933 and raised on a farm in Union County, North Carolina. She is the daughter of beautiful, loving parents of Scottish descent, who sometimes worked in the textile industry in order to survive economically.

After graduating from high school, she went to work for the Federal Bureau of Investigation (FBI), Washington DC. She served in the Women's Army Corp and was the first female honor graduate from The Southeastern Signal School of Cryptography. While in the Army she studied Political Science at the University of Georgia. The author was assigned to the Army Security Agency (ASA), attached to National Security Agency (NSA). She continued her studies at Georgetown University, Washington, D.C. while working in the U.S. Congress.

After leaving Congress, the author worked several years as a private secretary to the President of United Broadcasting Company, Washington, D.C. She became the first female member of the National Association of Broadcasters while attending Emerson Business School at night.

Jerry Issa travelled, lived and worked abroad in the Middle East for seven years in the 60's. Upon return home, she worked as the Production Planner for a manufacturing conglomerate in New Jersey.

Married to the same man for thirty-eight years, she is the mother of three, and grandmother of ten.

The author moved to Michigan in 1971 and became immersed in the New Age Movement. For the past seventeen years, she owned and operated a School of Metaphysics, and a New Age retail store.