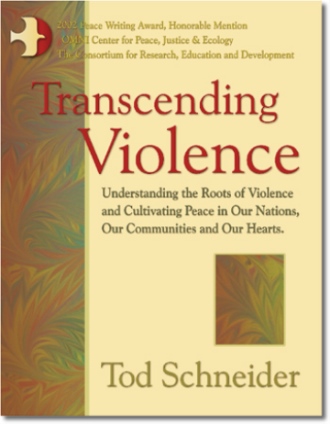 Every Ted Bundy/Charles Manson, Littleton, Rwanda/Kosovo inspires a renewed, desperate search for explanations & solutions. Hundreds of books wrestle w/ aspects of the problem: drugs, poverty, television, child abuse. Only a handful tackles violence on a broader scale. Called "a major contribution to violence theory" by the OMNI Center for Peace; a brilliant synthesis of all available models;" & the most comprehensive model of violence enabling yet to be developed;" by Lt. Col. Dave Grossman, author of the Pulitzer-nominated On Killing, Transcending Violence stands out in offering both explanations & pragmatic solutions

Violence comes in many shapes & sizes. It grows in almost any soil. Ethnic warfare & school shootings, crimes of passion & murder-for-hire seem to have little in common. One specialist blames overblown self-esteem while another points to deep-rooted shame. Criminologists, sociologists, police, peace activists, military historians & forensic psychologists bring contrasting perspectives to the table. Each explanation carries a large grain of truth, but when applied across the board quickly falls apart.

One error has been an obsession with finding only one factor that can carry the entire blame. Competing theories often throw light on specific incidents but not on others

These various perspectives become considerably more valuable when interwoven. Specifically, their shared characteristics & concerns can be sorted into up to 5 steps & 10 primary reinforcers. Variations on these 5 steps produce individually tailored paths to violence. That tapestry is laid out in the first half of Transcending Violence.

In part two, Transcending Violence takes this confluence model & turns it on its head. By identifying specific steps and reinforcers for violence, we become empowered to invert them. We can disassemble the steps & eliminate the reinforcers. These actions apply at all levels, from the individual to the global.

Tod Schneider, M.S., is the senior author of Safe School Design (ERIC 2000), and past editor of Community Safety Quarterly. As a police department crime prevention specialist for the past sixteen years, national violence prevention and school safety consultant, and adjunct University instructor, Tod has had the opportunity to study violence from a variety of perspectives, ranging from the theoretical to the pragmatic, the global to the personal. As a private consultant he has provided workshops and lectures for the Western Community Policing Institute, the Oregon Department of Education, the Lane County Criminal Justice Training Alliance, the Confederation of School Administrators, the American Institute of Architects, the Institute on Violence and Destructive Behavior, the U.S. Forest Service, the Tahoe Coalition of Recreation Providers, El Centro Latino Americano, Womenspace, the Professional Development Network, the Koch Crime Institute, the Kansas Advisory Group and the Arizona Juvenile Justice Association. His presentations on violence have drawn enthusiastic reviews from teachers, college students, social workers, forest workers and criminal justice professionals. He serves on the board of directors of the International Crime Prevention Through Environmental Design Association, works with the Lane County Domestic Violence Council on community building and batterer intervention, and serves as the CPTED inspector and consultant for the city of Eugene, Oregon. Under a federal Safe Schools grant he has inspected scores of schools, including Thurston High School in the aftermath of the Kip Kinkel shootings. He developed the School Whatever It Takes (SWIT) Team concept and training for school crime prevention specialists in three school districts. He is a trained instructor for the Second Step violence prevention curriculum, which he has taught at the elementary level. He also spent ten years in the social services sector, serving as a crisis counselor and director of White Bird clinic in Eugene, Oregon.

Tod has been an adoptive and emergency foster care provider, and writes children's stories in his spare time. He is married and has three sons.