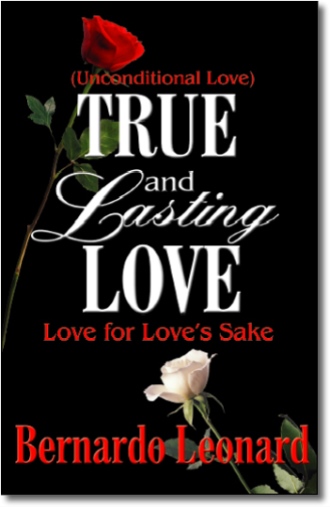 This is a must and essential book to have - "Le Meilleur" (the best). There is power in the words and gestures of Bernardo. It is impossible to read his work without being moved. He pours himself out before you and in your own heart you experience immediate contact and warmth. He transports you to a purer region, from which dogmas and mysteries descend. He loosened his words like arrows from the bow and his whole heart seems to fly with them. The pathetic, the profound, the sublime are side by side with the simple and the ordinary. What is most divine in the heart of a man cannot be expressed in writing. Yet this writer did. It has depth; it convicts. It causes one to re-evaluate oneself. Yet, dira la verite est beate (to tell the truth is beautiful). -Jean Paul (Screenwrite, Nice, France)

A very thought provoking book to say the least. As Bernardo Leonard points out with sometimes painful clarity, there is no greater power on earth than love. The merging of earthly Love and theological support of that Love is accomplished without undue and unneccessary presure to "convert". Instead, the pressure exerted upon the reader is to "think"; hence thought provoking. As much as I tried to disagree with him on certain issues of forgiveness, I knew in my heart that Bernardo was right. We can fool some of the people some of the time, fool all of the people all of the time, but we can never fool ourselves at any time. When you know the truth in your heart, you know the truth. Period. To err is human; to forgive is divine. So much of humanity is so far removed from divine; reading and digesting this book will bring them closer. The reader can identify with each of Bernardo's Love filled and Love driven chapters, because every human being is in search of ONE thing, and only one thing --- LOVE. Some run the race claiming it's money or fame they are after; others claim this and still others claim that. Every one of us understands that the reason we lives is to Love and be Loved. Thank you Bernardo for putting these truths to paper. -Stan Brushwood (Tucson, Arizona)

Bernardo Leonard is a warrior in God's army. He is a truth teller of the gospel -- no spin, just substance. An ex-professional baseball player and baseball scout for the Milwaukee Brewers organization, he is a two-time award winning sports video producer and author. He is a member of Who's Who in the international business world, a member of NAPTE (National Association of Television Executives), a member of Amnesty International, a member of the ACLU (American Civil Liberties Association), also worked as a High School teacher for the Louisiana State Department of Corrections, for the Florida State Department of Corrections, and last, as a clothes designer where his line of clothing was available at J.C. Penny stores, Dillards, and other larger stores.

Bernardo conducts baseball clinics worldwide, including in Cuba, Italy, Holland, Australia, Japan, China, and the United States. This affords him the opportunity to teach the fundamentals of baseball, and also to speak of the fundamentals of Christianity to a broad group of people. His desire is to bring back that old time Christianity, where fear of the Lord is of utmost importance. The heart of his message is simple: mercy, Christ's love, suffering, grace, justice, hope, and charity.

Bernardo once did a stint on Good Morning Australia, as baseball guest of the week. He is on National and international radio during spring training, promoting his book, "The Superstar Hitter's Bible", and promoting "The Feed the Children Foundation". He's called Zen Master and Hitting Guru. Bernardo believes the greatest acts of charity are those concerned with teaching the truth of the revealed kingdom.