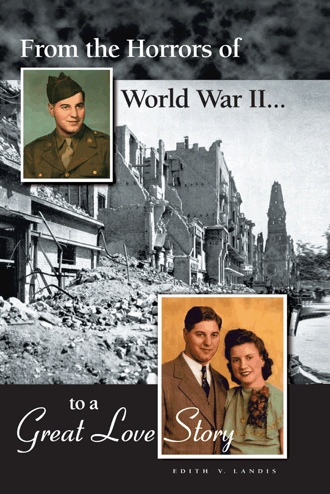 "I was one of the first seven German war brides to receive permission to come to the United States to marry an ex-GI after World War II. I was the first German war bride to come to Pennsylvania. It was such a happy moment when I was finally reunited with my fiancé, Ardell L Landis, who I would marry a short time later.

Because there was so much attention given to World War II in the last few years, I was asked to speak at several historical societies and also had several speaking engagements at schools and churches. Everyone that heard my story encouraged me to write a book. This work is a product of that encouragement.

This is a true story of my life in Germany during the Hitler Regime, World War II, six years of blackouts and air raids, and the last battle of Berlin by Russian troops. This is also the story of how I met my husband and our struggle to get through all the red tape for me to come to the United States so that we could be married.

My story, unlike some others, had a happy ending. Since coming to the United States so long ago I have lived a full and happy life, but I will never forget the war and those horrible times. It is my hope that with this book I can give people a glimpse into that time in history so that my experience can speak for so many others.

This is my story."
Edith V. Landis

Edith Landis grew up in Berlin, Germany. She has had numerous speaking engagements at local historical societies, schools and churches. She was encouraged to write a book about her life during World War II. During the American Occupation of Berlin, Germany she met her husband, Ardell. She was one of the first seven German war brides to receive permission to travel to the United States to marry an ex-GI. She lived with Ardell in Mt. Pleasant Mills, Pennsylvania from the time of their marriage in 1946 until his death in 1998 and still resides there today. The couple had two daughters, one son and four grandsons who live nearby and are a great source of comfort.